Inside the quest for the CX single source of truth with Comcast, Discover and others

This is what it takes to get a pair of running shoes in mid-2021: You ride the subway downtown to the Eaton Centre, the most central shopping mall in Toronto. You approach the security guard standing at the door and show him the e-mail with your order receipt. He then tells you which of the ten holding pens you should enter.

The pens are roped-off areas in the shape of a large square, each with a giant sticker showing a number. At this point you call the store from which you ordered the shoes. A young man asks for the receipt number. Then your name. Then what you ordered, even though he should have that information. He says someone will be up in 10-15 minutes.

Now there’s nothing to do except stare across at the other holding pens, where your fellow shoppers stare back blankly, perhaps trying to imitate parked cars.

This was neither the most pleasant nor the easiest way to get a pair of running shoes, but I knew it was the fastest. And though I describe it in a rather negative light, I felt differently after I received a survey via e-mail where the sender wasn’t simply the name of the brand, but was identified as coming from the “Customer Experience Team.”

The retailer in question was Sport Chek (which I believe is only present here in Canada), and though it is certainly not the only one conducting this kind of research, I’ve seldom seen it done so thoroughly and so well.

Inside A Well-Designed Questionnaire

Rather than call it curbside pickup (since it’s really about people coming in on foot), Sport Chek describes this option as “Pickup and Pay.” The survey asked me why I chose it, with options such as “the products I delivered were only available in-store,” “the delivery cost was too high” and “the expected delivery time was not clear on the web site.”

You can see instantly how the data gathered through just one question could be actionable across many areas of the company’s CX. But there was a lot more.

Yes, there was a question about whether I was able to get my order successfully, but there were other questions about how long I waited for it to be ready, and then how long I waited once I was on site (it turned out to be a lot less than 10-15 minutes).

There were three questions asking to rate the staff on how easy it was to find them, their helpfulness and friendliness. There were two questions about packaging: a request to rate both the condition of the packaging and the amount of packaging.

There were even three questions around the e-mail communications associated with the order, which I’ll reproduce here: 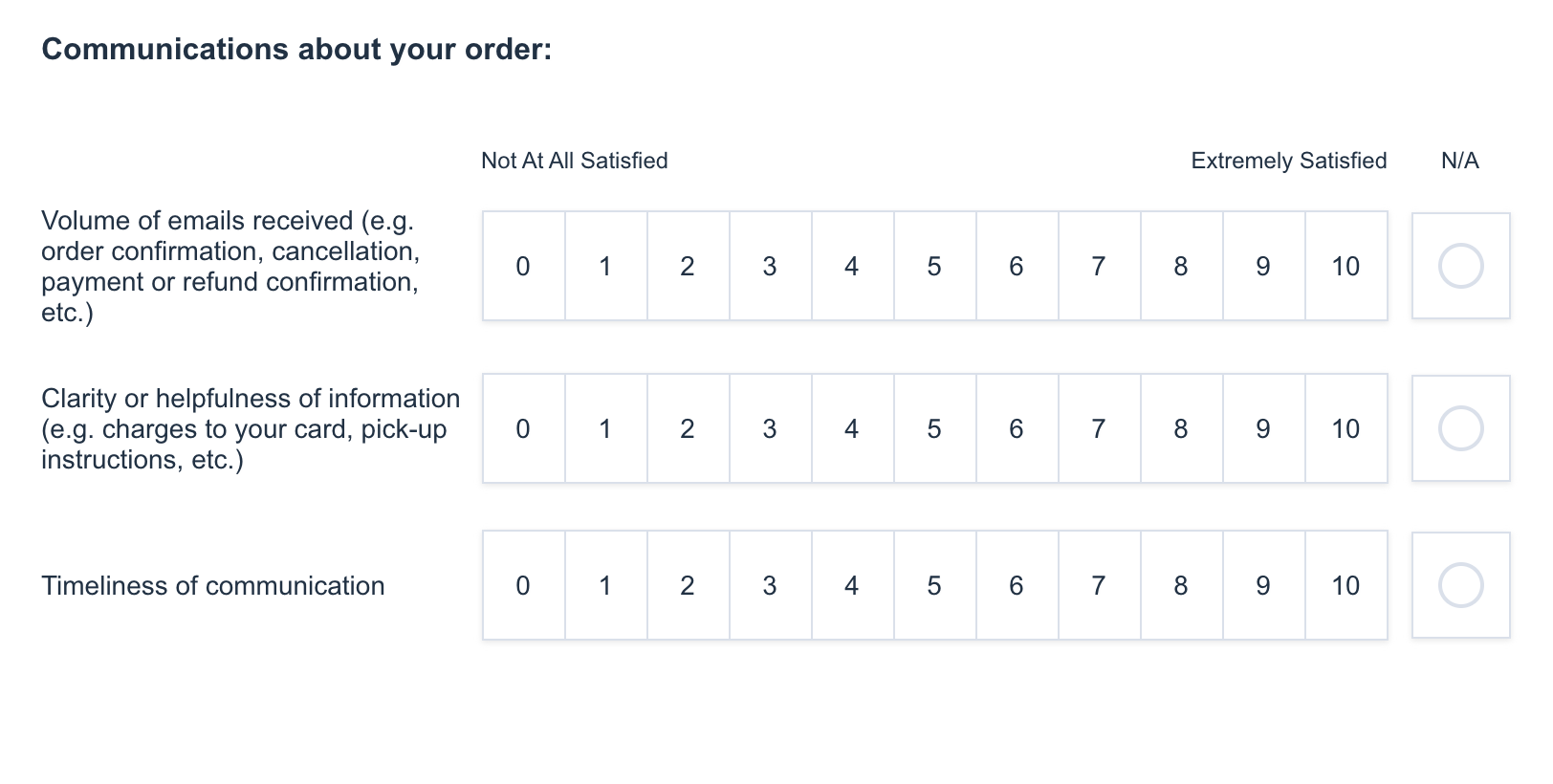 Even with this level of detail, the survey (which was powered by Medallia, I noticed), was pretty quick to fill out, and there was an open feed to provide more genuine feedback. Here was the final sign-off:

Thank you for your feedback. Our goal is to provide a seamless shopping experience to our customers, and your suggestions will play a major role in helping us identify opportunities to improve.

You know what? For once I actually believe it. Maybe it’s because I write about CX for a living, but it almost seems impossible that anyone would look at the results of this survey data and do nothing.

There was a real recognition in these questions that Pick Up and Pay is a new kind of customer experience, and Sport Chek was raising awareness that it has a dedicated team paying close attention to how well that experience is being delivered.

Once I had gotten my shoes I didn’t give much thought to the holding pen and the wait to get them. If you’d asked me in person, I might have said it was a tad annoying. After having gotten this survey, I feel differently — the company’s genuineness casts the entire thing in a different light, where I’m more likely to give the company grace and patience.

Sport Chek, like most retailers, may have a ways to go in getting these kinds of experiences running perfectly, but based on this survey I’d say its CX team is off and running.

Inside the quest for the CX single source of truth with Comcast, Discover and others

Why the CX community needs a Self-Service Gap Score

What ‘personalization’ means when you’re not shopping for yourself