This is a free preview article. Subscribe to get full access to my interviews with CX leaders, coverage of the top conferences and first look at CX research.

Living in quarantine for an extended period can make you feel as though you’re losing your mind, but may family has discovered a way to keep theirs intact.

We are still, despite the prominence of the Internet, newspaper subscribers, and recently I realized my wife and kids were unlike most people in that they weren’t simply leafing through the news section with an increasing sense of existential dread.

Every day, they are turning as quickly as possible to the back of the entertainment section. That’s where the wuzzles are.

For the uninitiated (which included me), wuzzles are a particular type of puzzle in which words are printed in such a way that their true meaning is not really clear. They were created by Tom Ecker, who recently wrote a memoir on the subject.  More than an anagram, less than a cryptic crossword, they take at least a few minutes to solve and occasionally much longer.

Here are a few examples, just in case you’ve never seen them before: 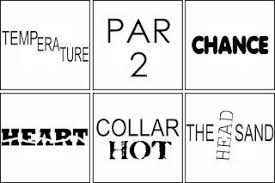 It occurred to me that the mental process of wuzzles, in a way, is not unlike the process of sifting through data to figure out what customers really want, and that they could serve as a source of inspiration to CX teams who may sometimes want to throw up their hands over what they see in their dashboards and portals.

The Greatest Sources Of Insight Don’t Always Seem To Deserve Close Study: Wuzzles are deceptively simple by design. They use everyday, often one-syllable, words. It would be simple to glance at them once and, seeing no obvious call to action, simply forget them. Only by being positioned as a puzzle does anyone pay attention and try to figure them out.

Customer data may come in large volumes, occasionally burying the details or distracting CX pros from the wuzzle-like gems that, if acted upon, could transform relationships.

Small Shifts In Perspective Can Lead To Big Revelations: The key to solving a wuzzle sometimes requires simply looking at where letters are placed, rather than the word they seem to spell, or “hearing” how the words or letters sound if they’re read individually.

I suspect a lot of the major CX “a-ha” moments happen like this. Instead of looking at a customer’s purchase history, a company discovers what it needs to do by looking at a change in their buyer journey, or realizing there was more than one person involved in the buying decision, or that the journey actually started or ended in ways the brand didn’t recognize right away.

Seeing What Should Have Been Obvious Offers A Unique, Addictive Pleasure: My wife’s lovely face lights up, looking even more beautiful, when she solves a wuzzle. I think there’s something so reassuring about making that cognitive connection and seeing the logic behind what was previously impenetrable.

CX isn’t just about solving puzzles, of course, but I think it’s a role that will attract a certain type of mind — one that tries to think as holistically and as comprehensively at customer data as possible, scrutinizing what others would dismiss. Not just puzzling over the answers, but bringing just the right blend of talents to work them out.

Is life-centric the new customer-centric?

The coffee shop concept that’s missing from most digital experiences

The experience that drives people to pay $500 for a cooler

What ‘an obesity of experiences’ means for CX leaders

Why microtransactions put BMW in the hot seat