There are two types of chief customer officer. The first are those who join a company and assess what their predecessor did, looking for areas to build upon or improve. Then there are people like Amy Shore, who represent the first person in the organization’s history to hold the title.

Speaking in a keynote session at a Conference Board event earlier this month, Shore noted that chief customer officers are increasingly being appointed as more organizations recognize the role of customer experience (CX) design in driving a sustained competitive advantage.

In Shore’s case, she was promoted into the role in 2019 following the arrival of a new CEO at Columbus, Ohio-based Nationwide, which offers a range of insurance and financial services products. One of her first priorities was to define what the title should stand for. Her conclusion?

“We are the one person who gets up every day thinking about the customer first, and who knows them best,” Shore said. “Everyone is responsible for CX as part of their role, but the CCO thinks of it as their entire role.”

This puts Shore in the middle of three different variations she presented for the chief customer officer role. On one side is the “influencer” who sets standards and shares best practices. There is also the “transformer” who has their own budget and formally controls customer-facing operations. As a “partner” chief customer officer, Shore said her responsibilities include communications, project planning and overseeing direct metrics that contribute to Nationwide’s success. 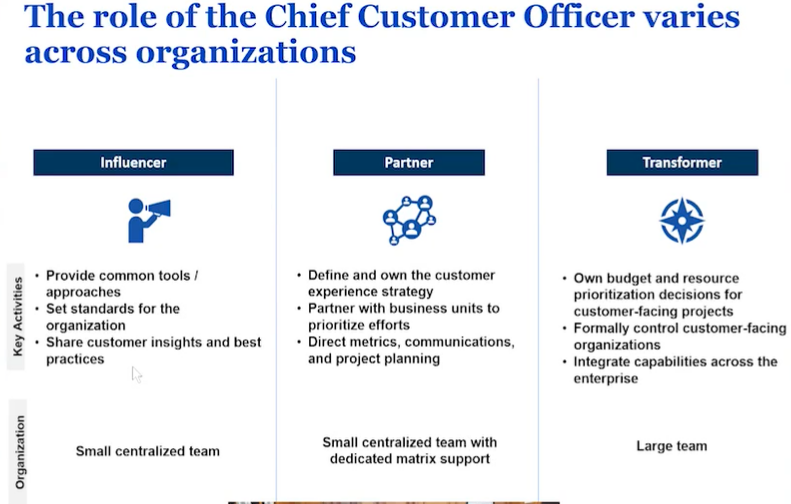 “I work to create ethe vision, the strategy and deliver tools, and then business units and other functional areas execute on the strategy,” she said. “Also, our CX strategy exists in support of our business strategy.”

Shore said her strategy has manifested itself in efforts aimed at creating alignment, prioritization, a shared vision and enablement of Nationwide’s associates.

The organization has formed a Customer Engagement Council, for instance, which is a cross-functional, cross-enterprise group of SVPs and VPs that share common goals. This group discusses and deploys capabilities to build a customer-centric culture, oversee customer feedback management and the use of data and analytics.

A service community, meanwhile, was formed contact center ops leaders to focus on continuity and quality amid the COVID-19 pandemic. Their work has evolved to connect leaders and speak with one voice in how to run successful contact centers, she said. Key focus areas here have included telephony, systems reliability and associate recruitment, retention and rewards.

Shore said Nationwide has also strived to deepen the expertise of its staff through sponsoring cohorts of employees to pursue CX certification. It has also curated LinkedIn learning courses as part of a future of work initiative. Of course, a course on cultivating empathy was its most popular among the team last year, she said.

Beyond the front-line staff which Shore says now hold daily huddles to improve upon CX, Nationwide has set up board-level committees focused on customer outcomes.

Like other chief customer officers, Shore highlighted the connection between employee and customer experiences. That’s why she said Nationwide has defined a mission statement — “We exist to protect people, businesses and futures with extraordinary care” – to rally the team around a common set of values and beliefs.

“We knew we needed to provide guardrails on what that looks like, though,” she added. “We have been saturating the organization with messages to make the idea of ‘extraordinary care’ feel more local.”

Examples include “Mission Moments That Matter,” a storytelling series that showcase case studies from individual associates and entire teams. These are often used to open meetings “to keep customers’ voices in the room – even the board room,” she said. 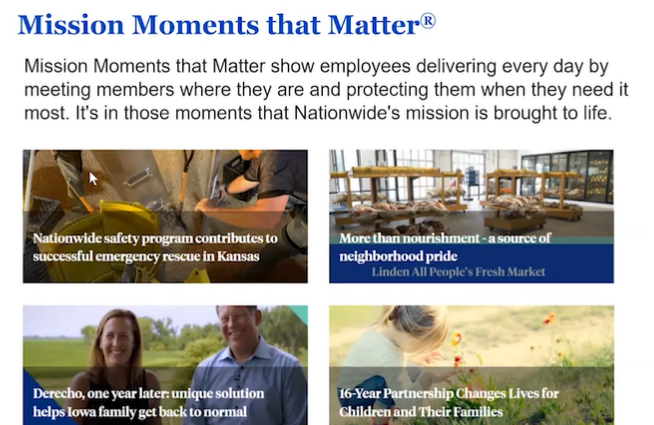 Nationwide’s CX principles, meanwhile, were developed with inputs from customers and business partners. They boil down to creating an experience that is effortless, personal and reassuring.

Shore said the principals are driven home through a variety of channels, such as customer site on Nationwide’s intranet where associates can learn more. The company has also introduced what it calls a “Bravo” e-card when people put principles into practice. About 40,000 such “Bravos” are now being sent out each year, she said. Then there is a virtual experience room, where Shore said the company uses interactive media to show tangible experience of CX in a service context.

Like many other organizations, Nationwide continues to inform changes to its CX strategy through a voice of the customer (VoC) program. Some of that program is based around data from established sources such as J.D. Power’s research and its own Customer Enthusiasm Monitor survey. However it has also deployed a feedback management platform to get insights from other sources, including social media and recordings from its contact center. Shore said the team has analyzed more than 3.4 million such calls so far.

In late 2020, Nationwide also began bringing more structure to how it managed CX milestones. This has been broken up into “associate customer centricity,” “customer satisfaction” and “customer-driven growth.”

And if that didn’t make the point clearly enough, Shore shared an image that captured it at a glance. “It’s in the shape of a C,” she said. “I like that, because it reminds us it really is about customers.” 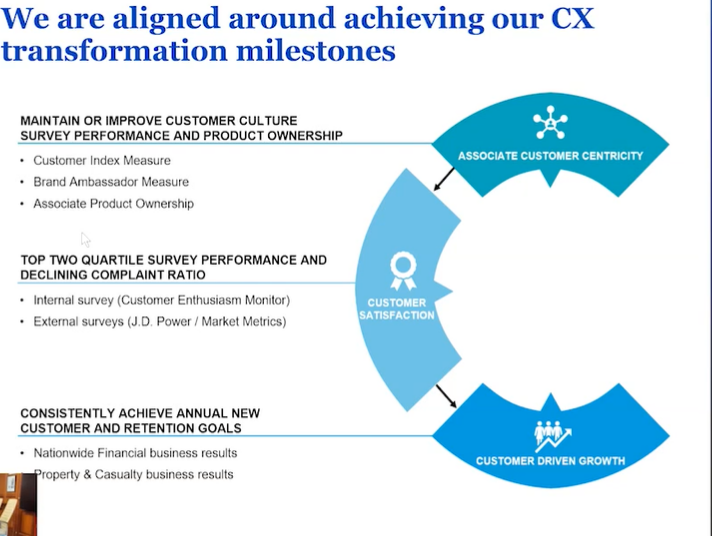