As an avid distance swimmer, Janelle Barlow has no problem moving through cold water. She is well aware, however, that when other people enter a pool, they may be expecting a different kind of customer experience.

“If you’re staying at a hotel, you may want to stand in the pool to talk to other people, and you want it warm,” the longtime consultant and executive coach points out. “So you complain to someone to heat up the pool, but if they make it too warm it won’t cool off fast enough for them to enjoy it.”

For Barlow, this is a perfect example of the many challenges in meeting customer expectations, and a good reminder that negative feedback is almost always part of the process. It’s also an object lesson that speaks to the key message of her book, A Complaint Is A Gift, the third edition of which has recently been published.

Originally released in 1996, A Complaint Is A Gift is subtitled “How To Learn From Critical Feedback and Recover Customer Loyalty.” Barlow argues that defining complaints as such will inform how companies react to them, and warns readers to distinguish between the top-line messages in a complaint versus the “embedded threats” they may contain.

“At first glance, a customer may complain they waited on hold for three and a half hours to get help setting up their expensive new computer. Fundamentally, they fear they made a stupid purchasing decision, a lingering fear that will periodically rear its head over the course of all the years they need technical help,” Barlow writes. “It’s tempting to put emphasis solely on solving the customer’s issue when first hearing a complaint. In that case, customers remain frustrated or may not listen to a proposed solution, even if it’s a good one.”

Last updated in 2008, Barlow said the third edition of A Complaint Is A Gift was necessary in part to address the way the Internet has created myriad new channels for customers to offer negative feedback, as well as the way companies are now using technology to manage such feedback.

“This wasn’t going to be a book where I could just tack on a new introduction,” Barlow told 360 Magazine. “These companies are all looking on the Internet now to see what is being said about them. And they can use big data to really analyze what it means for them.” 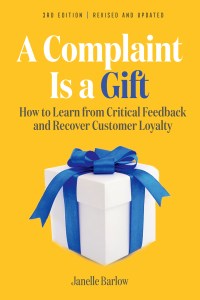 While chief customer officers and CX practitioners may already have share a similar perspective to the one Barlow describes in A Complaint Is A Gift, the book could be helpful in educating those in other parts of the business and achieving buy-in on a CX strategy.

Barlow doesn’t dig deep into technologies such as customer data platforms (CDPs) and personalization applications, for example. Instead, she blends summaries of recent research and real-life anecdotes to illustrate how complaints happen – and why so many organizations are ill-prepared to handle them.

Some of her advice includes:

Beware the quest for customer utopia

CX teams may be focused on boosting metrics such as Net Promoter Score or customer satisfaction (CSAT), but Barlow noted that some senior business leaders become myopically focused on trying to eliminate complaints altogether.

“You’ll have a CEO who says ‘I’m getting sick and tired of hearing about that’ in regards to a common complaint,” she said. “When an influential voice within the organization suggests they don’t want to know about complaints any more, people listen. You begin to hear staff try to gloss over complaints, saying ‘We handled that,’ or suggesting it didn’t happen. That’s not going to help your business over time.”

Barlow tells a personal story of having to call a company about her Internet and phone services. She had to go through an intermediary rather than the telecom provider, but the customer service agent helping her wound up texting back and forth with the telecom provider to get answers to her questions. When Barlow suggested it would make more sense for her to talk to the telecom provider directly, she was told “That’s not how we do business,” and that she would simply be rerouted to the intermediary.

“It’s like when you complain to someone in a store and they say, ‘Oh, I don’t work in this department, talk to someone on the upper floor,’” she said. “You need to give people the flexibility to actually address what the customer is complaining about. These are often complex situations.”

Recognize the complaints in the questions

With the entire world continuing to struggle with macroeconomic challenges and ongoing supply chain disruptions, brands will find themselves being asked about the course of action they’re taking. Barlow pointed to one of the most common queries that may not be picked up in a typical voice of the customer program.

“People will say, ‘Why are your prices so high?’ but companies don’t always treat it as a complaint,” she said. “It is a complaint. You have to provide the right context – that we’re dealing with a global phenomenon of high shipping prices. Whatever the complaint is, customers tend to want three things: they want you to address the negatives, tell them what you’re going to do and that you’re serious about it.”

How FedEx strives to deliver ROI for customer experience investments