It may not sound like one of the conventional metrics, but Jason Grier suggests brands should put their CX strategy to the Goldilocks test.

First, there are the strategies that are too cold, in the sense the company doesn’t back them up with enough investment resources to execute effectively, or where you’re only going after the low-hanging fruit.

Then there are companies whose CX strategy is too hot, where they take on too many priorities at once and fail to do any of them particularly well.

The “just right” approach, according to the chief customer officer of Redwood City, Calif.-based software provider Reputation, is about finding a balance between those two extremes and keeping it simple.

“It’s all the things we know — you make a journey map, find the pain, figure out the pains you can fix and what you’re going to do now, next and later,” Grier told 360 Magazine. “If you do that, you’re not only going to have a more customer-focused organization or company, you’ll have a company where everybody in the company can get behind it.”

The reason companies routinely fail the Goldilocks text, Grier suggested, is a lot of insight on key signals coming directly from their customers. This includes what they might be saying on social media, and (more importantly) how they feel when they’re saying it.

Reputation has been trying to help by developing a concept it calls reputation experience management (RXM). This includes the use of its platform to determine an organization’s Reputation Score X, which uses AI to assess the sentiment, visibility and engagement of a firm’s reputation and even compare it to competitors. 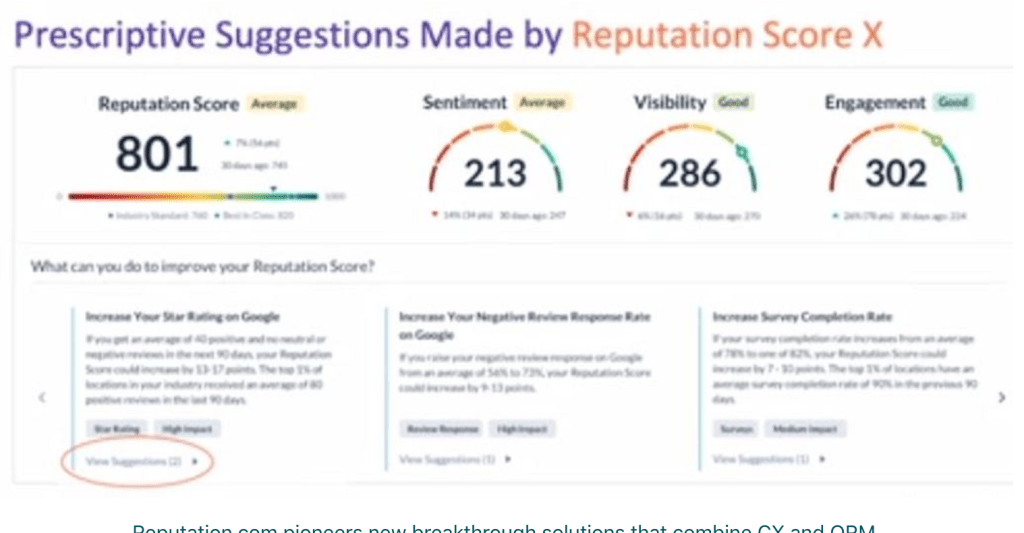 Earlier this month Reputation added to its portfolio with the acquisition of Nuvi, a Lehi, Utah-based maker of social software. Nuvi had been trying to dig deeper than traditional sentiment analysis with tools that would identify emotions such as anger, fear, sadness, disgust, surprise, anticipation, trust, and joy.

Grier pointed out that emotion — while just as important as customer success and effort from an experience standpoint — has always been more challenging for brands to effectively measure. Nuvi, which will become an R&D office for Reputation, can help its customers see how sentiment and emotion plays into concepts such as lifetime value.

“Think about all the things NPS was never created to incorporate — it was developed  before social media, before reviews,” he said, referring to Net Promoter Score. “This world of feedback has gone from a symphony to a cacophony. Today, you’er literally dealing with a new listening post every hundred days.”

Getting To The ‘Now What?’

Sentiment and emotion are even more important inputs given the shift to largely digital-first experiences following the COVID-19 outbreak. Grier said Reputation is seeing considerable traction in markets like automotive and property development, while health-care organizations will benefit from understanding how patients and care providers adapt new safety protocols and changes in the delivery of treatment.

“What I hypothesized very early on was, we have an inherent lack of skill in the business world at taking large chunks of data, analyzing it and turning it into action,” he said. “You won’t ever be able to get to the ROI of anything without a ‘Now what?”, which is how to operationalize the data. In other words, to take what your customers are saying how they feel about their experience with you and then create incentives for them to keep coming back.”

As Reputation grows, Grier acknowledged part of his role will involve guiding customers around the best way to gather data about sentiment and emotion without raising concerns about data privacy. Just as consumers have become more aware of how ad retargeting works, for example, they may soon realize how companies use platforms from firms like Reputation to monitor not only where they browse, but how they feel.

“We’ve all felt the creepiness that working with technology can bring,” he said, noting the way in which brands like Amazon and Netflix try to tailor their offerings based on specifics about individuals. “The question isn’t what’s the balance so much as why do people tolerate it? In some way shape or form there is a value exchange that’s meaningful. You have to prove that the value is really worth it.”

Only 47% of firms review their CX strategy every year

Why a VoC program should be an active listening program