The moment of the guest speaker’s arrival — whether it’s Tony Robbins, Warren Buffett or the futurist Ray Kurtsweil — is as satisfyingly sci-fi as the most ardent Star Trek fans  could have possibly hoped.

There’s the dramatic sound effects, a deep boom and what seems almost like a sped up, digital wind chime. There’s a tornado of electricity that swirls around a beam of light, which ultimately disappears.

What’s left is not a physical presence like Star Trek’s Transporter would provide. Instead, it’s a slightly transparent rendering of a person that’s closer to the “Force projections” of Star Wars. That rendering, however, is 3D, life-sized and possibly the most embodied experience you’re likely to get without being the in the same room with someone.

Long before the COVID-19 pandemic caused the cancellation of most in-person conferences and events, Toronto-based ARHT Media Inc. was already offering a way to digitally connect audiences with the most in-demand experts in multiple fields. Its high-definition hologram technology has allowed organizers to beam in keynote speakers from the worlds of health-care, finance, education, entertainment and professional services rather than putting them on a plane.

More recently, the company has been offering what it has trademarked as the Virtual Global Stage (VGS), where it can stream presenters to appear in life size proportions and interact with each other in real-time, regardless of where they are in the world.

The Business Case For Holograms

At a time when audiences may be growing weary of virtual summits via Zoom or similar tools. ARHT says its VGS offers higher levels of engagement, content retention and — critical for many customer experience (CX) leaders — higher Net Promoter Scores (NPS).

“Companies are looking to do something more impactful than basically throwing up a group of headshots on a screen,” Larry O’Reilly, ARHT Media Inc.’s CEO, told 360 Magazine. “Remember that more than 50 percent of communication is body language. In a standard video event, if you have more than one person on stage at a time, people don’t know when it’s their turn to talk. With our technology you get all of those non-verbal cues where you can really capture emotion and see a normal conversation.”

Examples include the Blockchain Research Institute, which last summer used ARHT’s VGS for its digital awards program. O’Reilly described it as similar to a traditional TV show in terms of its production values, but without all the fees around bringing presenters and winners together. Another event with Novartis drew thousands of views compared to the hundreds that were typical of more traditional virtual sessions.

Besides VGS, AHRT can offer either a temporary Holopresence Display for conferences and other temporary installations, or a HoloPod that can be permanently installed in an office, lecture hall or other environment. The actual image capture can all be done with off-the-shelf equipment such as a green screen and a 4K camera, though O’Reilly said having good lighting is important. 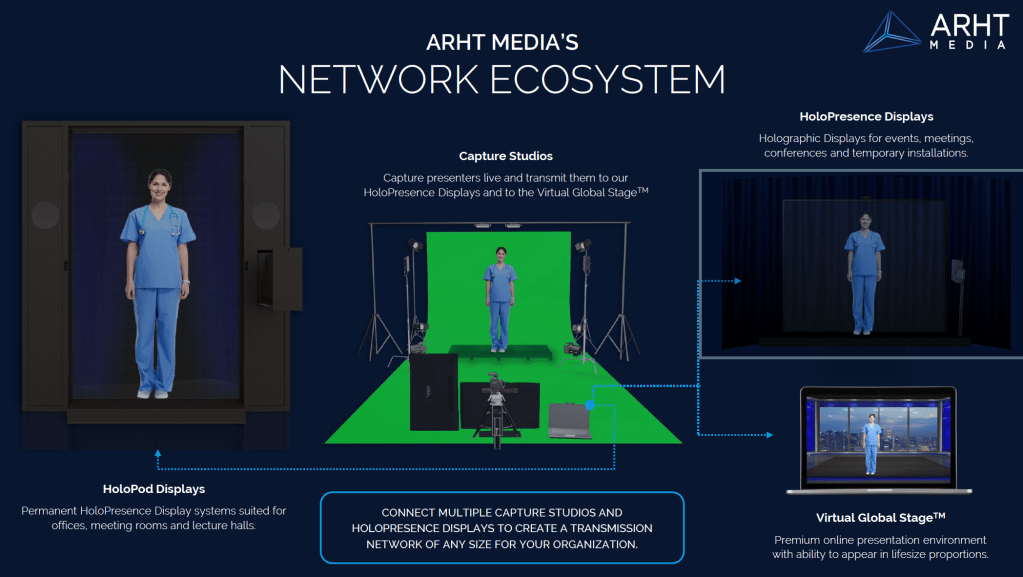 Once they’ve been beamed in, the person behind the hologram can see the audience they’re addressing through a monitor, but the result is designed to be more intimate than a Zoom call.

“It’s the eye contact that is wholly different,” O’Reilly said. “We’re trying to create the illusion that people who are hours apart are on the exact same stage with each other.”

ARHT isn’t alone in the holographic space. Others include Imverse, which is working on technology aimed at facilitating virtual meeting rooms using little more than a smartphone, and Spatial which is also trying to develop holographic-style  workspaces.

Whereas those firms sometimes lean on virtual reality (VR) headsets or augmented reality (AR) filters, O’Reilly said ARHT believes it can differentiate based on the quality and richness of its projections, which he said have almost no latency.

So far, ARHT’s key vertical markets include pharmaceutical companies, which can use its holograms it to educate doctors and medical practitioners on the details of new medications like vaccines.

“There are usually only one or two people who are the product specialists or research scientists behind a vaccine, and they are in infinite demand,” he said.

That said, ARHT is already working with a range of brands in other industries, who are starting to explore how the technology could let them offer a compelling customer experience in the safest possible way.

Building firm Tridel, for instance, has turned to ARHT Media to show off new condominiums, and financial services firms in North America have beamed exchange-traded fund (ETF) specialists to broker in Shanghai, Beijing and Tokyo. It’s not difficult to imagine how hotels might use a HoloPod to create a digital concierge services, or how a high-end retailer could offer consultations via hologram instead of a video call.

It might seem unrealistic to suggest a hologram could make up for a truly face-to-face encounter, but the pandemic showed how quickly people would become accustomed to alternative experiences based on need. O’Reilly pointed out how companies like ARHT could save a bank from having a mortgage or small business loan specialist in every branch, or could help organizations that need to conduct business in languages like Mandarin.

Holograms could even bridge the gap for less transactional experiences but simply enhance a moment. Before the pandemic, mobile phone maker Huawei worked with ARHT to beam in a sommelier from a winery to a downtown Toronto media event.

“Our focus is having permanent capture and displays at enterprise organizations — large multinationals, university networks or anywhere people could share expertise and share tools,” he said. “We will always do events, and we’re in this transition period, but when you set up the permanent installation, the economics are really compelling.”

HR screenings via hologram? Maybe. Employee training? Why not? The only thing that isn’t clear is what kind of critical mass will be necessary before technology like ARHT Media reaches a tipping point where it becomes more of an expectation than a novelty.

“We’re creating tools that companies can use every day to improve their digital communications,” he said. “It’s just a wholly different thing and when you appear like you’re actually there.”