Less than one half of organizations have a single person or team responsible for managing and improving the customer experience, even though research from [24]7.ai suggests doing so can lead to greater success.

The San Jose, Calif.-based firm, which provides artificial intelligence (AI) applications for use in contact centers, gathered data from more than 400 survey respondents as part of a study titled ‘The CX Leader of the Future What’s Changed, What’s Possible — and What Works.’

Of the 49 per cent that have centralized CX, 71 per cent said they use key performance indicators (KPIs) to improve customer experiences. These include customer lifetime value, customer acquisition costs and customer satisfaction. In contrast, only 34 per cent of those who distribute CX responsibilities across multiple departments said they’re doing the same. 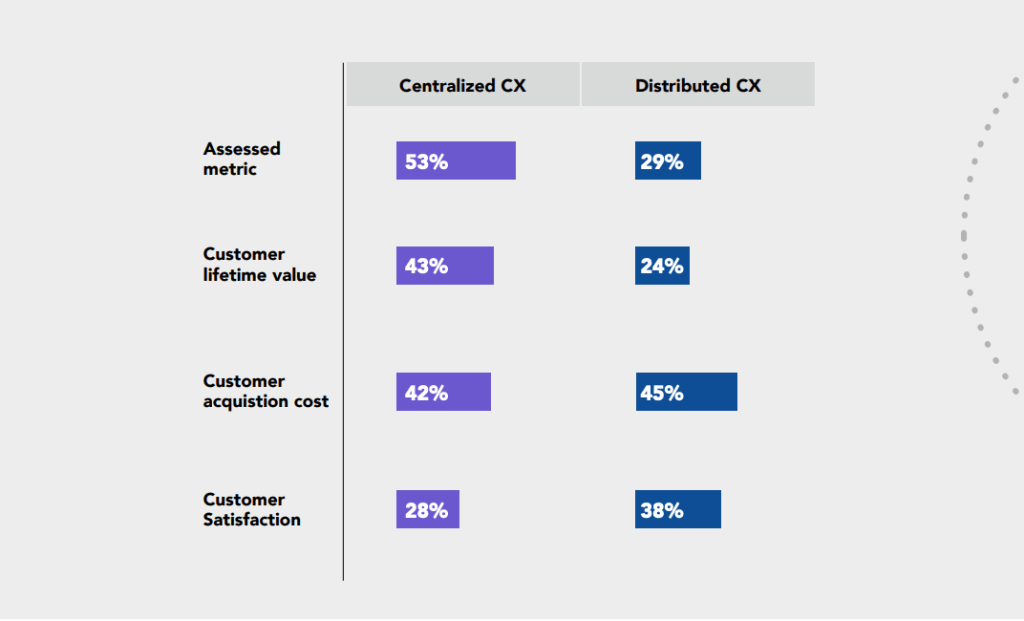 Meanwhile, 53 per cent of those with centralized CX functions said they always align profit goals with customer-first decisions, compared with just 16 per cent of firms with distributed CX. Centralizing CX also means having a designated chief customer officer in the majority of cases. Eighty five per cent of those in that camp have such a role, though over half of distributed teams, or 56 per cent, said they have a CCO as well.

“By centralizing efforts to improve CX, leaders can more easily identify the internal challenges that prevent improvements from taking hold,” the report’s authors wrote. “The outcomes experienced by centralized organizations give ammunition to distributed organizations needing to make the business case for putting more attention into CX.”

It’s hard to read the [24]7.ai report and wonder if its sales team is simply tired of having to approach multiple departments in a given organization before they can figure out who’s going to invest in its CX applications.

That said, the 16-page eBook doesn’t make any overt sales pitches for the company’s products, or even touch upon the benefits of AI and automation in any detail. This is really about leadership, and it comes at a time when many organizations who have struggled with CX may need to consider what kind of organizational structure makes sense.

It would have been even better if the survey had dug into the negative aspects of a distributed CX approach. “Trying to deliver exceptional customer experiences without centralized ownership of CX leads to inefficient processes, greater expenses and poor experiences,” the report says at one point.

This is no doubt true, but how about some quantifiable examples? Respondents may have been shy to give such specifics, but that’s where [24]7.ai had an opportunity to showcase its own expertise based on interactions it has had with various customers.

Beyond the numbers, the report also includes some answers to an open-ended question: “What change would make the most impact on improving customer experience at your organization?” Some of the respondents cited a need to improve the way CX priorities were quantified and ranked, as well as streamlined communication across groups.

That last point is a good one, actually. You can have a chief customer officer and a centralized CX team, but it’s equally important that such a centralized function doesn’t become another silo unto itself.