While 69 per cent of contact leaders said they were using artificial intelligence to complement human agents with self-service tools last year, only 60 per cent are saying the same thing today, according to research from Talkdesk.

The San Francisco-based firm, which offers cloud-based tools to help manage contact centers, conducted approximately 500 qualitative interviews with CX professionals employed by organizations with more than 100 full-time employees and fielded an online survey for its report,  The Future of AI 2022: Progressing AI Maturity in the Contact Center.

Besides the decline in AI self-service overall, Talkdesk found the percentage of those saying they feel moderately to extremely familiar with AI in the contact center also dipped, from a high of 93 per cent in 2021 to 87 per cent in April, when the research was conducted. There was a similar downward trend in those who described their organization as advanced in its use of AI, from 41 per cent to 35 per cent.

Self-service wasn’t the only area where use of AI in the contact center dropped, either. Talkdesk’s data showed it was true across everything from analyzing customer data to automating data entry. 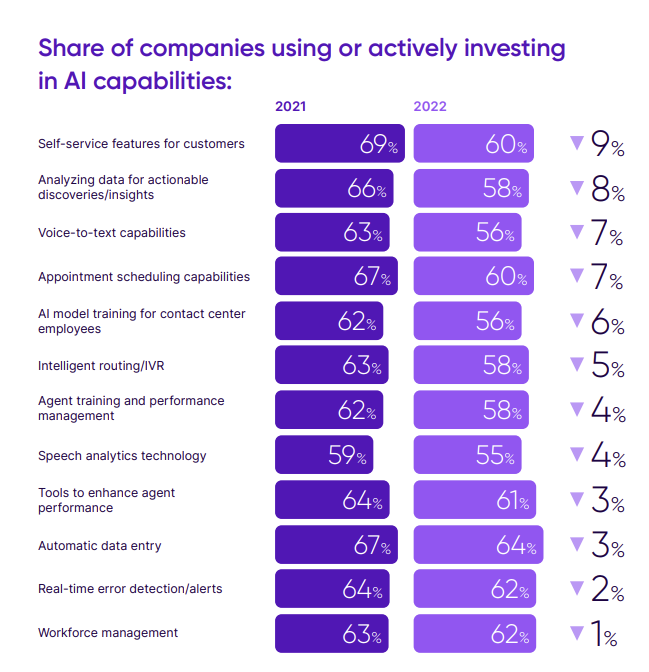 Talkdesk suggested some of the changes, particularly around awareness, could be attributed to the “Great Resignation,” as well as increased pressure to focus on day-to-day operations versus major CX enhancements.

“It may be that rising turnover has brought in talent that is not as familiar with AI tools. It may be that AI technology has advanced so rapidly that confidence in understanding it is waning,” the report’s authors wrote.  “It may also be that leaders have been distracted by more pressing priorities over the last year and simply feel they have not kept pace
with AI developments.”

The statistics in this report put Talkdesk in the unenviable position of trying to make the longer-term outlook for AI particularly bright,  and getting ahead of the biggest impediments.

By asking questions more creatively, for instance, the company found that 79 per cent of contact centers plan to increase spending on AI and automation this year. CX leaders also agreed with statements that AI will make contact center data more useful, secure and so on — even if they’re not quite ready to take advantage of it yet.

Probably the most telling finding in the study is the half (50 per cent) who said they were limited to “less effective AI in their current contact center infrastructure.” Translation: it will take more than simply signing up for a SaaS-based application to truly reap the potential benefits of AI. First they may need to replace substantial investments in technologies that, apart from an inability to layer AI overtop them, are working well enough that companies don’t want to loosen the purse strings.

I’ll add to the speculation in this report by saying that many contact centers are still far from data-driven, and haven’t fully thought through what AI self-service will mean for common processes their agents perform, how it will affect the way they track metrics and so on.

That said, this research could be useful for CX leaders who wonder if they’re alone in their challenges, and who want to be more proactive in convincing management that they delay their exploration of AI at their peril.

How 988 contact centers can provide the best caller experience

Just 35% of consumers are completely satisfied with brand relationships

Strategy, Technology, Voice Of The Customer

6 in 10 consumers are ‘underwhelmed’ by CX via social media