Sixteen and a half years ago, when Micah Citti was hired on to help one of the best-known brands in sports broadcasting set up its first contact center, he was given two mandates: to provide world-class service, and to establish what would be considered “the ESPN of customer care.”

If the latter seems obvious — Citti currently serves as customer service operations lead for Bristol, Conn.-based ESPN — he said it required rethinking the traditional approach to managing agents, using technology and how its particular kind of customer should be treated.

Speaking in a keynote during the first day of the CXN Live: Contact Centers 2021 virtual event on Tuesday, Citti discussed the organization’s mission “to serve sports fans anywhere, anytime.”

While it’s easy to interpret that as a directive to bring sports content across every possible channel, Citti has to think about how to apply it specifically in the context of customer experience, such as when fans need help. He also needs to do so in a spirit that might seem worlds away what’s offered by a traditional enterprise.

“To be the ESPN of customer care means having a culture, a personality for our customer care experience, that dovetails into all the other media experiences we have with our fans,” Citti said. “Everybody on the team has an incredible background in customer care — decades or more. We know the standards of the customer care model. That means we also knew there were a lot of aspects that we didn’t think really worked, or wouldn’t give us the kind of success that we wanted to achieve.”

“The small cost of that floor space gives people breathing room so they’re not packed together,” he said, adding that the relationship with agents requires extra consideration, given that ESPN uses talent from a business process outsourcing (BPO) firm rather than hiring staff.  “There is no separation between us. I really hate being called ‘client.’ I like being called ‘teammate.’ That’s not just lip service. That’s how we operate.

“We treat agents like vital business partners,” he added. “I’ll tell them, ‘I can’t pay a million an hour, or change the nature of the job, but I can work with you to create an environment where the workplace doesn’t create your stress.’”

Focusing on the fan experience also means that while metrics like average handle time are tracked on the back end, Citti’s top priority is customer satisfaction (CSAT), which indicates whether fans are delighted or not.

For the past two years, ESPN has been focused on addressing a particular factor that’s made its customer care experience more challenging. It comes down to two words: fantasy football.

“With the advent of Fantasy Football season, our traffic can increase by sometimes more than 100 fold,” he said. “Our critical mass time is about now, in July, all through the end of September. We would triple the size of headcount in order to accommodate the influx of contacts playing Fantasy Football on ESPN.”

Unfortunately, simply adding more agents wasn’t enough to contend with what fans needed, which is why Citti and his team have launched FanBot, a chat application that was intended to help deflect some of the most common issues. 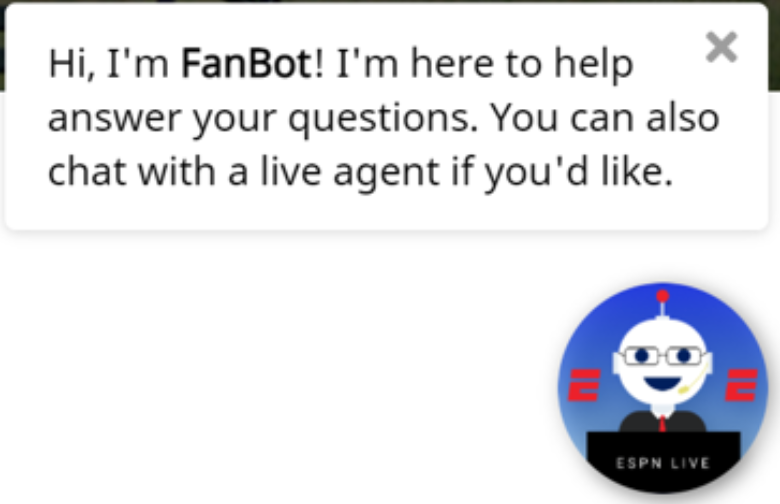 In early research, for example, Citti said the team learned a lot of the Fantasy Footballl-related problems customers were having related to login issues and basic questions of how to join to draft, how to create a league and not being sure of how many leagues they could join.

Even before launching FanBot, Citti said the team took a look at how it could template responses across other channels. They also beefed up FAQ pages and created videos — such as how to reset your Fantasy Football password — as a way of encouraging self service. Citti said he even talked with the product team behind ESPN’s Fantasy Football platform to see if there were other ways to make it easier or clearer to use.

Though he didn’t mention any specific vendors who had helped provide its FanBot, Citti said it quickly became clear that many existing chatbot products were very different in their approach to serving customers. The idea of them having true artificial intelligence, meanwhile, seemed dubious.

And of course, ESPN had to consider what bringing in a chatbot might mean for the agents as well as fans.

“We found that when you bring in your agents as part of this process, they became champions of the customer,” he said. “They’re on the lookout for the fan. A poorly implemented chatbot is just going to make their lives harder.”

Beyond making sure FanBot could handle queries “brilliantly,” Citti said the need to reflect ESPN’s overall customer experience allowed the team to have fun with it. Given its resemblance to popular on-air talent Scott Van Pelt, for instance, the chatbot was soon nicknamed Bot Van Pelt.

The FanBot is also “dressed” differently so that it might wear a Dodgers uniform for those looking up baseball-related content, or football gear in another context.

“We also had to have realistic expectations: not everyone’s going to respond and will want to talk to a bot,” he said. “We front-loaded that so it will say, ‘If you want to talk to a human, let me know,’ and if so you will be connected instantly.”

So far, FanBot has a helped ESPN achieve a deflection rate of 65 per cent, or two out of three people who would have contacted an agent. If you factored in some issues, like password resets, he said the deflection rate would be closer to 80 per cent.

Despite the usual fears about introducing chatbot technology, meanwhile, Citti said his headcount has remained flat and that agent satisfaction has increased. The only issue? CSAT scores for using the FanBot tend to be 10 per cent less than when fans talk to an agent.

“The worst thing I’ve done — and I take full blame — is using the same CSAT measure for FanBot. That’s not fair to the chatbot,” he said. “It’s not humana. It is not a like-for-like measure.” Work is now underway to create a CSAT survey more reflective of the chatbot experience, he said.

In the meantime, ESPN’s customer care team has a weekly meeting to continue looking at ways to improve FanBot. This not only includes the developer but agents and even ESPN’s product team, Citti said.