From the moment a car buyer shows interest in the Ford Mustang Mach-E, they begin a journey that offers a good example of how Ford of Europe is trying to improve its ability to personalize customer experiences at scale.

It starts with a landing page and a form called “Keep Me Informed,” which captures data about a prospect’s desire to know more about Ford’s electric vehicle (and the first available completely via e-commerce purchase).

A day after signing up, the prospect receives an e-mail about the range of Mach-E vehicles. Two days after that, they get another message showing off all the Mach-E’s technical features. After another 24 hours, they’ll be introduced to digital pricing tools. How they engage at this point will affect the interval before the next messages.

According to Claire Hepworth, Ford of Europe’s head of Customer Engagement, this represents great progress in the company’s efforts to use technologies like CRM and marketing automation to deliver an average of 5,500 communications every year across 41 countries and even more language variances. 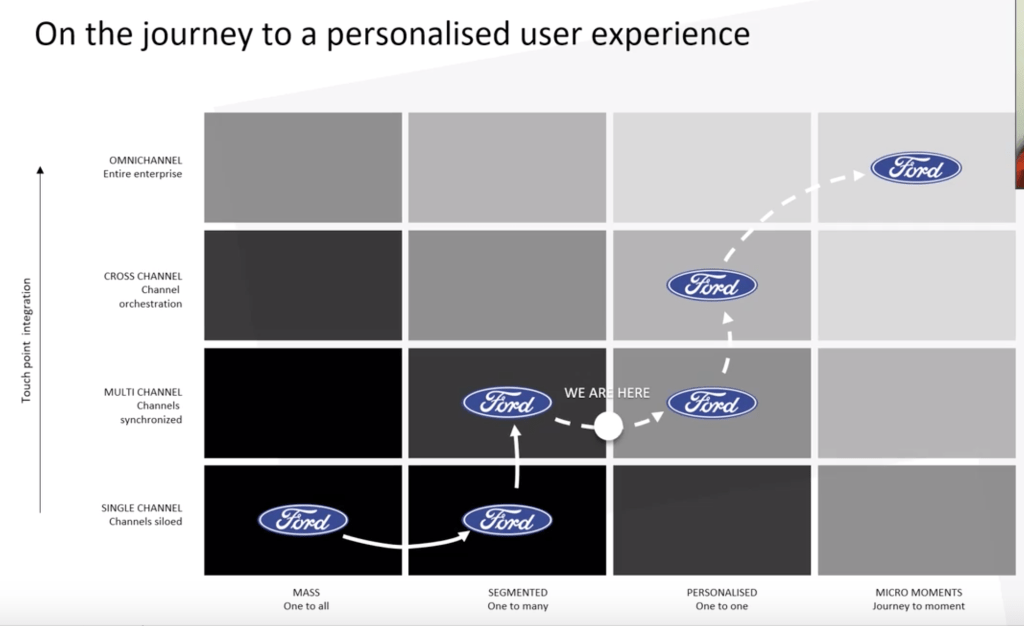 Getting there has involved leaning on its partners, such as WPP, and also recognizing where it was falling short, Hepworth said during a session at the recent Adobe Summit. which was hosted virtually.

“The challenge is we weren’t ready internally to use that software and to take full advantage of its features. For a while we were not maximizing our investment,” she said. Parts of the business were using parts of the system, parts of the times, and the landscape was constantly evolving.”

Deploying Adobe Marketing Cloud served as the foundation for what’s come next, allowing the company to offer omni-channel communications across touchpoint such as its web site, e-mail and mobile devices.

At the same time, Ford of Europe has also spent considerable time mapping the journeys its customers might take. This includes 33 live experiences it is managing today, 37 which are in development and an additional 27 that are being scoped out, she said.

“We were really thinking about what would the customer need and want in each moment, what’s the best best channel and how could we make them really feel like family and really personalize that experience,” she said.

This represented a considerable challenge, given that much of the company’s existing communications were relatively static and onerous to complete.

Building a newsletter was a 14-day process, for instance, and deploying an e-mail campaign could stretch to the 11-hour mark, with only a 15 per cent open rate as a result.

Since deploying the Adobe technology and breaking down organizational silos, Hepworth said the company can now build a newsletter in one to three days and deploy within a four-hour period. Open rates, meanwhile, are up to 56 per cent, and even higher for some campaigns — the Mach-E e-mail messages have an open rate of 69 per cent, for example. 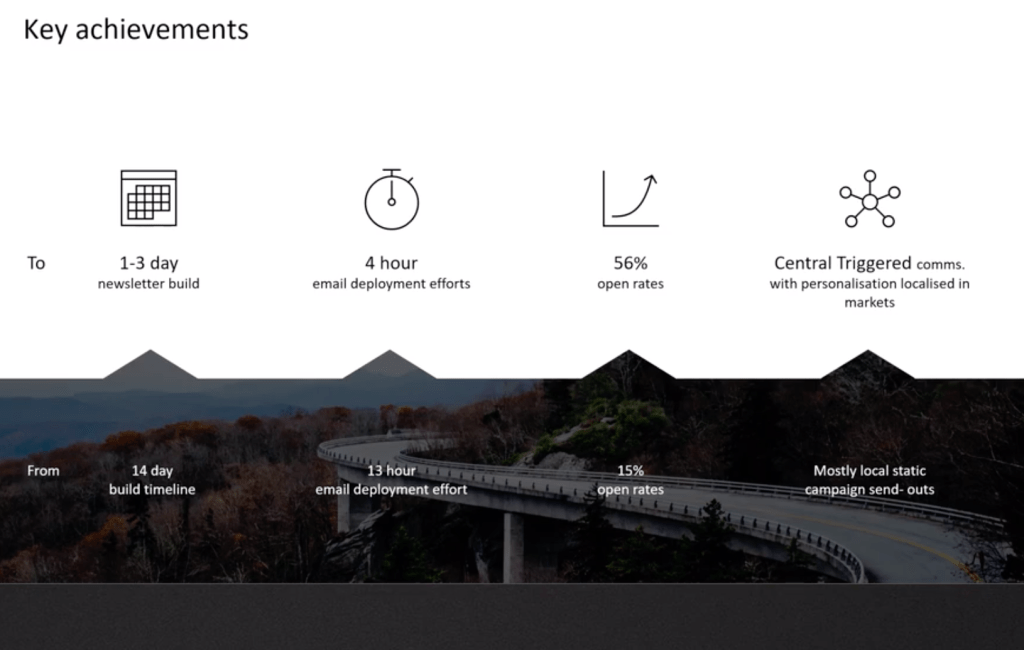 The communications are also personalized to customers based on their vehicle and services they’ve bought. Along the way, Ford of Europe offers customers specific tips and updates, starting with the delivery status fo a vehicle to the one-year anniversary of ownership.

“It means we can help them get more out of their vehicle, and increase customer satisfaction,” she said.

Ford of Europe has now deployed additional Adobe platforms, from Experience Cloud to its analytics tools. This allows the team to continue personalizing and optimizing campaigns based on the time of day, channel selection and other variables.

“Once we see results we like, the program is rolled out to all markets for localization,” she said.

Next steps include making using dynamic content across channels and adding dynamic content in messages in order to reduce variations, Hepworth said. The company also wants to extend into additional channels, such as in-car communications.

The CX mirage is fooling no one: Time to give customers the oasis they deserve