The term “omnichannel” has been firmly established in functions like marketing and technology for years, but 40 per cent of those surveyed by CX Network say they continue to grapple with a “multichannel model” where “the connections between them are quite fragmented.

Digital Customer Experience Report 2020, which was sponsored by InMoment and published this week, is based on a survey of close to 150 business professionals involved in customer experience (CX) design and management.

Only 20 per cent of respondents said they had achieved synergy between some of the channels their customers use as part of their journey. Nearly a quarter, or 24 per cent, said identifying customers across multiple lines of business was a challenge — it the most cited digital CX hurdle in the last.

Part of the issue could be what companies are using to keep track of customer behavior. Not surprisingly, email and phone topped the list of identifiers, and post addresses are still there. Only 10 per cent of respondents, however, said they were using data from major digital channels such as mobile apps or even their own web sites. 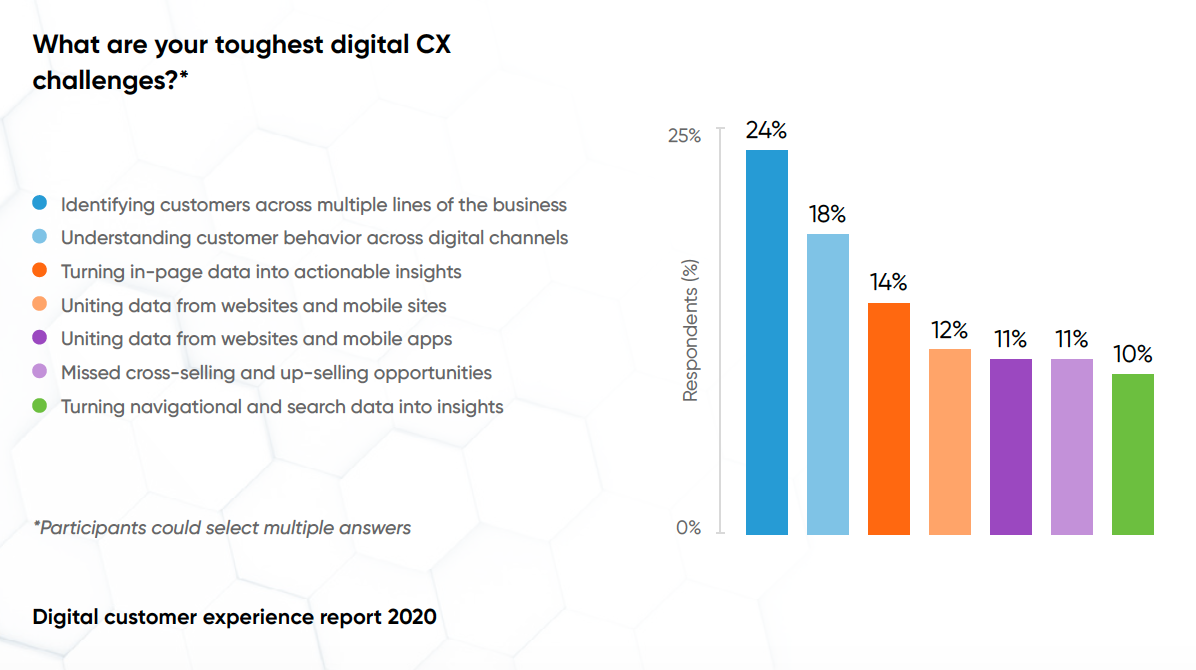 Still, the CX Network said there were “pockets of progression” in the research, such as the fact that the amount of CX professioanls admitting they only have one or two key channels has been reduced by about 50 per cent.

“This improvement in accessibility is pivotal as research has shown there are clear trends in channel preference for particular customer segments and different channels appear to attract distinct types of feedback,” the report says. “A varied suite of channels ensures the voice of the customer heard by a brand is holistic and fully representative.”

The first third of the CX Network report confirmed a lot of conventional wisdom, such as the fact that brands had to move more aggressively in offering digital tools and the increased use of them by their customers. The failure to fully embrace an omnichannel approach, however, shows that some back-end work probably should have been done in order to prevent digital experiences that are inconsistent at best and disjointed at worst.

As with previous CX Network research, some of the best value comes in the sidebars featuring inspiring ideas and best practices from some of the world’s most familiar brands.

This includes Coca-Cola, which is using an augmented reality app and sensors in vending machines to keep customers hydrated after a workout. Fashion retailer Asos, meanwhile, was cited for using an Apple Watch app to keep customers notified about sales and other promotions.

That said, neither of these examples spoke to how the brands were using such projects to create a more holistic picture of customer behavior, or how they connected to more traditional channels.

Bear in mind, of course, that the sample size in the CX Network report is relatively small, and the entire report only 14 pages, suggesting there is still a lot of the omnichannel CX story still waiting to be told.

Chief customer officer conversations: Bluecore’s Ryan Deutsch on how to be an omnichannel thinker