For nearly 20 years now, tens of thousands have been making the trek to the Black Rock desert in northwestern Nevada for Burning Man, where they become temporary citizens of a makeshift city that celebrates art, self-expression and community.

Then came COVID-19, and as the world scrambled to cope with the outbreak, organizers of the week-long event — which rejects the term “festival” — decided by April 10 that gathering in person would have to be called off.

According to Kim Cook, director of creative initiatives at Burning Man Project, this was almost immediately followed by a decision to go virtual, though she admitted there was no clear sense of how they were going to do it. 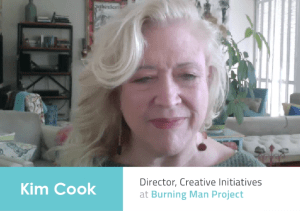 In the end, Burning Man 2020 was held in what organizers described as the “multiverse,” or “a global quantum kaleidoscope of possibility” that included the opportunity to create an art installation, join a Theme Camp, drive a virtual Mutant Vehicle, or enjoy an online performance.

According to Cook, who spoke at a virtual summit about the future of hybrid in-person and online events hosted by Bizzabo, Burning Man 2020 was successful in large part because of the community it had already established over several decades.

Early on, for instance, the organizers put out a call online for anyone interested in contributing to the experience in some way. Within 24 hours, more than 11,000 people had replied, and it only grew from there.

“I think (volunteers are) under-utilized in a way. We don’t quite necessarily see them beyond a workforce,” she said. “At Burning Man it’s about illuminating and elevating the gifts that someone wants to bring — even if they don’t know how to bring them.”

One of the challenges in adapting something as experiential as Burning Man, Cook said, is that many people had a different perspective on what “interactivity” means. Much could be learned from the gaming community, for instance, where eSports is already offering a highly social virtual environment.

“The challenge is in figuring out what that social space means absent the game,” she said.

Besides a rabid base of contributors, Cook pointed out that Burning Man had the advantage of its 10 principles. These include “Radial Inclusion,” which the 2020 event could deliver on by extending the opportunity to participate to anyone around the world. There is also “Decommodification,” which means avoiding sponsorships and “Immediacy.”

These principles could inform the experience whether it was a held in person or not, Cook said.

“My work has always been about finding the intersection and congruence that brings people together and cause connection, which I think is what all for us who work in events really live for,” she said. “We had to go back to that which is inherently Burning Man —to think and solution and find the common shared vocabulary to create  the experience.”

Bringing Burning Man online wound up validating something else Cook said is intrinsic of the “Burners” who normally come to Black Rock: an aptitude for risk-taking and experimentation. Sometimes more traditional events get trapped by their perceived constraints about what the experience should be.

“Burners, for the most part  will go and do something and make it happen and iterate. It’s not being so structured that you can’t learn along the way,” she said.

Cook recommended other event planners bear in ind the emotional aspects of what attendees will experience as well as what they learn and can bring back to their workplaces. Firms should also think more deeply about who they are and whether, in the kind of event they put on, they are staying true to that sense of identity and demonstrating their intentions to their community.

“People need to be embodied. Don’t go with a cerebral solution — pay attention to your gut’s connection to your intuition,” she said, adding that all great events are essentially telling a story about their organizers. “You can have a lot of fun around that, even if what you’re talking about is dishwashing soap.”