Even if she had come to see it as one of the best development opportunities for her children, the pandemic was going to have “Supermom Stephanie” looking at Goldfish Swim School a little warily, and Shana Krisan knew it.

As the vice-president of marketing for the Birmingham, MI-based franchise operation, Krisan uses “Supermom Stephanie” as a key customer persona. It’s that woman who is juggling multiple responsibilities across work and home, on on her phone looking for testimonials online or e-mailing her friends as she searches for the ideal spot to get her kids comfortable in the water.

Creating a customer experience tailored around a parent like that has helped Goldfish Swim School grow to 110 schools open and 140-plus in development in more than 34 states and in Canada. Until COVID-19 forced many locations to shut down at least temporarily, Golfish franchises were collectively teaching more than 138,000 students per week.

Today, of course, parents might be understandably skittish about taking their children anywhere outside the home. That’s why Krisan said the company conducted a survey across its membership base to gauge what would make them feel safe and their intentions about coming back.

The feedback was clear: approximately 30 per cent said they would likely not return until a COVID-19 vaccine has been developed and made available. That data has informed much of what Goldfish is doing now, and confirmed to Krisan that what it has already done were the right moves.

Long before the pandemic, for example, Krisan and her marketing team (which she developed almost from scratch about seven years ago) had been promoting the “Golden Experience” the brand offers. This includes its Science of Swimplay, an approach that emphasizes water safety while trying to make it as enjoyable as possible.

“Sometimes people do know the stats around (water safety and children. Sometimes they don’t,” Krisan told 360 Magazine. “We want to be able to market to both sides of that, and also look at other aspects, like if they want their child’s confidence. We just don’t want kids to worry about how they learn. We want them to beg their parents to bring them back.”

Goldfish’s Science of Swimplay is complemented by the designs of its locations. These include a atate-of-the-art water purification system to keep the pools clean and sanitary, and an air-conditioned viewing gallery for parents to relax, work, read, socialize (digitally and personally) and watch their kids swim. Class sizes were already small (max 4:1 student-to-teacher ratio for group classes), but since then Goldfish has introduced a range of new measures.

Member and student distancing, PPE equipment like face masks for staff and members and health assessments have all been communicated in a campaign dubbed “Stronger, Safer, Together.” 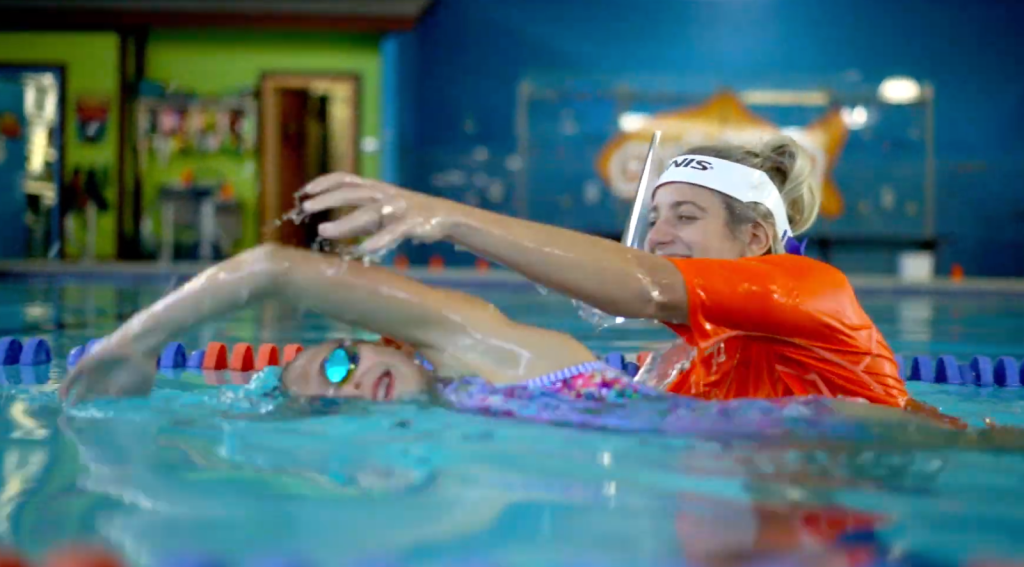 Who are you calling a Director of CX?

“We had to think through what we wanted to put out there. It was not so much about selling at that point, since all our locations were shut down. It was more a question of how could we continue to instil the trust Godlfish has?”

While some parents might have taken their children to a lake in the summer or had a pool at home, the rise of working from home meant kids might have less oversight while in the water, Krisan pointed out.

“We needed to make sure through our programming that parents still understood that safety is paramount, and arguably even more important now,” she said.

With a number of locations now offering classes again, Krisan and her team are taking a more experimental approach with the customer experience. This includes testing programs that only run twice per week to offer parents more flexibility, and a referral program for parents who feel its schools are safe to share their experience with their peers.

“There’s a lot you can measure on the marketing side, but you can’t always measure the feelings and the intent that parents have,” Krisan said. “We want to be able to go in and work with our curriculum and measuring what we can, but also continuing to get parents involved in active conversations with us so we always understand what that ‘golden experience’ needs to look like.”