It was a controversy that was becoming national news in India, and the team at Nestlé was struggling with how to respond to it: there were reports that Maggi, its instant noodle brand, contained high amounts of lead, resulting in a government ban on the product.

According to Ritanbara Mundrey, head of Global Consumer and Marketplace Insights at Nestlé, the amounts of lead in Maggi are based on a misconception, but that’s not the point of this story. As the story raged on from 2015 onwards, Mundrey was asked asked to examine the sizeable conversation about it on social media and determine the impact it would have on the firm’s customer experiences.

By developing an algorithm that looked at a sample of the social media mentions of Maggi and lead, Mundrey discovered something important. While many of the posts were expressing concern about Maggi’s ingredients, there were many others making fun of the issue and the government’s response. A number that were using the word “lead” were also not about a substance but about the act of leading.

“(The two terms) were being used interchangeably,” Mundrey said during an opening session of the CXN Live virtual summit on Tuesday. “(The social listening tool) was doing its job, but it was doing its job out of context.”

Since then, Mundrey and her team have continued to apply the lesson from the Maggi controversy to the work done by its Consumer Engagement Services, where customers can call, write an email or send snail mail with any feedback.

Mundrey showed a chart, for example, that attempted to organize the feedback based on the topics customers were weighing in on, such as 14 who were offering product suggestions.

“The issue we would be asked to deal with was, ‘We get this list and we don’t know what to do with it. How can we make the data speak to us better?’” she said.

By digging deeper, the issue of context reared its head again. Mundrey and her team discovered that much of the feedback was focused on more specific issues, including questions about where to find the best before date on a package or how to prepare a certain kind of sauce.

“The action standard from a company’s point or view to a consumer who is just asking why you do not produce a certain SKU versus, ‘I brought a product that was way beyond its shelf life’ is very different,” she said. “In the one case the manufacturer needs to take quick action. In another, any response that may go out in a reasonable amount of time is acceptable.”

This led to the creation of a framework Nestlé could use to better analyze customer feedback as well as improve upon the experiences it offers. It uses the acronym TALK, which recognizes that in some cases customers simply want to “Tell” the company something, while in other cases they want to “Ask,” have the firm “Listen” or “Korrect” something. 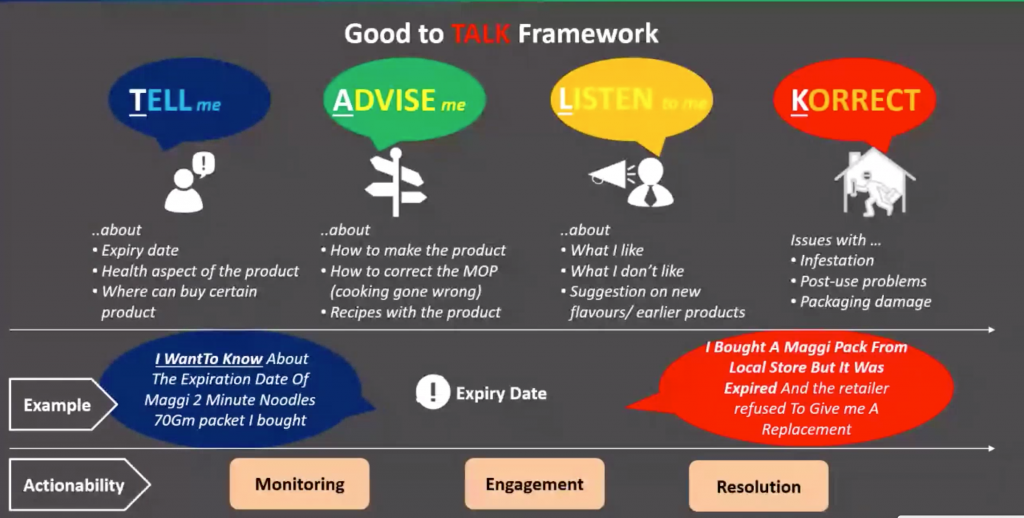 The creation of TALK not only ensured Nestlé didn’t overlook any important customer feedback, but that it could better understand where the bulk of customer feedback was weighed. For example, Mundrey said approximately 86 percent of what comes through CES is about giving suggestions, not demanding specific action.

Nestlé isn’t stopping with the TALK framework, however, but has embarked on a larger initiative to filter data into a contextual framework. Dubbed the Mutli Intelligent Data Analytics System, or MIDAS, and her team are aiming to create a systematic, enterprise-wide platform to power decision making to accelerate growth for Nestlé.

The next step for Nestle — as for many other CX leaders — is turning that data into gold.