Why Mountain Equipment Co-Op may be risking a CX comeuppance

Comcast has reduced manual call listening capacity by 90 per cent and Valvoline has saved 2,800 hours a month for its store teams though the adoption of CX software from NICE, executives told the software firm’s Interactions Live virtual conference on Wednesday.

Speaking at the second day of an event the company said attracted more than 20,000 CX professionals across 115 countries, NICE InContact CEO Paul Jarman reflected on the impact of COVID-19 on those in customer service departments, which he said had proven to be an essential part of enterprise business continuity planning.

“You were the rock-solid and go-to function for millions of citizens and consumers in need,” while other departments developed short and longer-term plans, he said. “It shattered several long-standing myths and created new axioms of what we’ll refer to as new CX normalcy.”

Many firms are now taking a second look at what they believed were their “speed limits” for making changes to customer service, Jarman said, while in other cases the real roadblocks to transformation became clearer. He called for a new emphasis on “extreme CX agility” to continue meeting customer needs.”

To help educate and inspire organizations towards extreme CX agility, NICE featured major customers like Comcast, which used its analytics tools, NICE Nexidia, and its AI-powered conversational guidance tool, NICE Enlighten, to improve the experience of its agents.

Prior to deploying the technology, Comcast had been monitoring between five or 10 interactions of each agent to inform the way it coached them, according to Eric Burton, its vice-president for customer and employee tools. Besides the fact it didn’t offer a great sample size, calls and chats were being scored manually, which created inconsistencies.

At the same time, Comcast was moving from a checklist to measure agent quality to a set of eight specific behaviors, such as “being warm and friendly” and “making service effortless.” This made manual evaluations even more prone to bias, he said.

Like many firms in its sector, Comcast is focused on boosting its Net Promotor Score (NPS), but this is broken down to relational and transactional NPS, Burton explained. The eight behaviours were seen as closely related to improving the relationship side, while sentiment analysis could provide visibility into the latter. 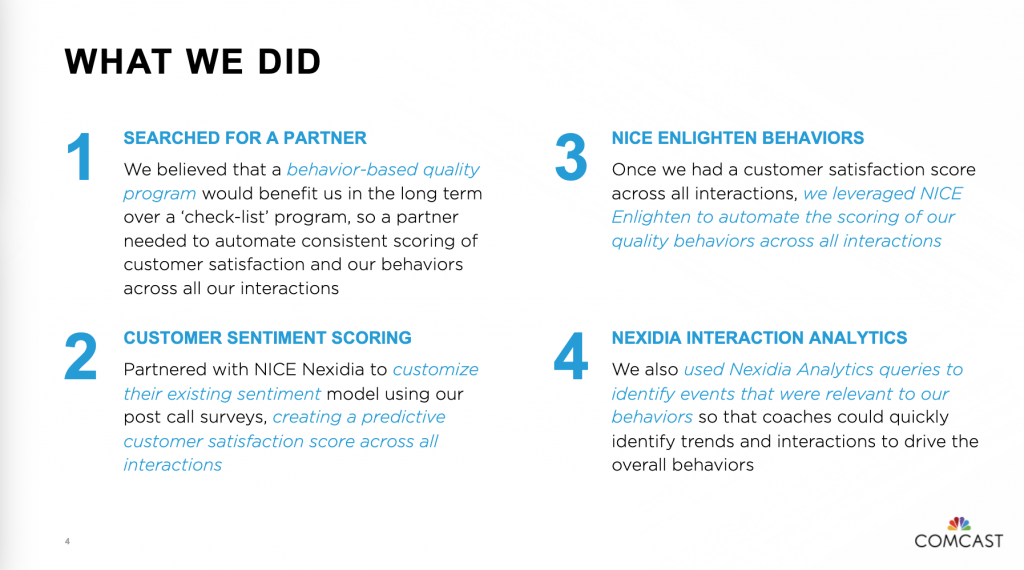 The NICE toolset is offering the degree of automation that is now offering that insight across every interaction versus less than 0.5 per cent, Burton said, with detailed feedback on every call. This has enabled targeted, outlier performance management.

“We’re now coaching to trends, not individual interactions,” he said. “That completely changes the dynamic for coaches to discuss opportunities with agents.”

At Valvoline, meanwhile, the more than 150-year-old inventor of motor oil was trying to address a disconnect between the experience it offers in its more than 1,200 corporate and franchise locations and what happened when customers were calling in.

“At each location the phone would ring and ring and ring,” said Shawn Castle, Valvoine’s director of customer support. There was also no way to automate service for callers when employees were busy in-store. “When someone called and there was no message, they would maybe hang up and call our competitor.”

Valvoline has since deployed NICE InContact CXOne, its cloud-based contact centre software platform. The project included developing scripts for pop-ups with store information that employees see the moment a customer calls in. 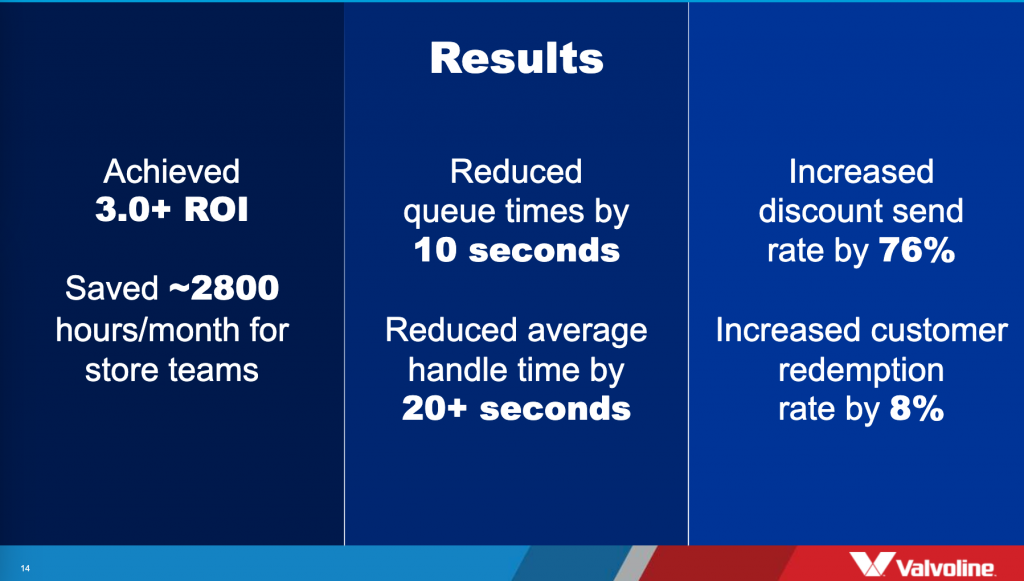 The company has also piloted a tagging feature so the team spends less time logging and capturing information. Finally, the company is now able to offer coupons via SMS instead of simply e-mail, which has boosted redemption by eight per cent and discounted spend rate by 76 per cent.

“This has been really important, because we’re realizing that most of our callers are now customers,” he said.

Jarman predicted more CX professionals would take bold moves thanks to what they have already achieved amid COVID-19.

“You all got special powers,” he said, “and did things you couldn’t imagine you would do.”

Why Mountain Equipment Co-Op may be risking a CX comeuppance