Major retailers trailed QSRs in offering the fastest in-store pickup experiences, but the operational complexity and technological requirements of curbside pickup were another matter, according to a study conducted by Rakuten.

The San Mateo, Calif.-based firm, which offers a location-centric mobile commerce platform that connects stores and restaurants with mobile customers, released its 2020 Time Study on Wednesday. Using secret shoppers, Rakuten benchmarked the speed at which various kinds of consumer businesses were able to fulfill orders in-store, at the curb or via drive-thru.

Based on previous versions of the same report, Rakuten Ready said it has established that a wait time of under two minutes is four times more likely to keep customers loyal. Despite the rush among many brands to introduce options like in-store and curbside pickup, however, that golden threshold proved difficult to attain.

Target and Walmart, for instance, struggled with increased demand amid COVID-19 that wait times actually grew from under four minutes to over seven minutes, according to Rakuten Ready. Among the top performers were Home Depot, which used pickup lockers and other tactics that decreased its wait times by 40 per cent. 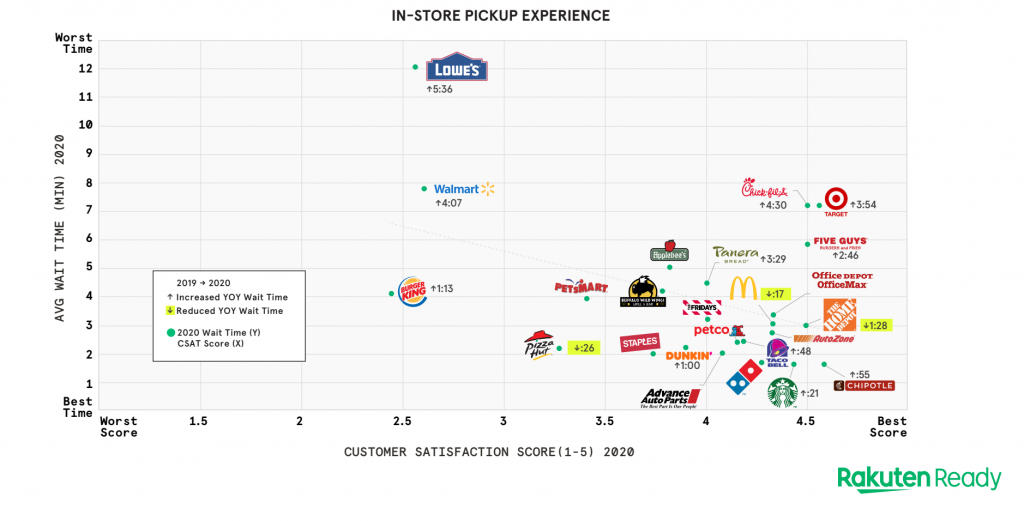 QSRs generally performed better with in-store pickup at three minutes than retailers, but were slower in offering curbside pickup than casual dining restaurants, a new category Rakuten added to its report this year. Grocery stores, on the other hand, adapted better than expected given the complexity of the orders involved.

As might be expected, customer satisfaction (CSAT) scores tended to rise or fall depending on the speed at which in-store, curbside pickup or drive-thru orders were fulfilled. Chipotle stood out by introducing designate drive-thru areas called “Chipotlanes.”

“What we thought was going to be an experiment that would require pausing, turned into hundreds of shopping and takeout experiences that delivered clear learnings and insights,” the report’s authors wrote. “We were . . . surprised that grocers were amongst the top performers in curbside pickup, unattended in-store pickup seemed to drop in availability, and contactless fulfillment was not a consistent experience across brands.”

This kind of research obviously takes on new significance given the ongoing pandemic and the likely demand for a variety of pickup experiences from consumer brands. While some initial glitches might be understandable, the reality is that order fulfilment becomes one of the most memorable parts off a customer experience if it is slow, difficult or if the order wasn’t fulfilled properly.

Beyond the stats and benchmarks, the Rakuten Ready study is filled with anonymous comments directed at specific brands. Some of them are truly horrifying and could be an object lesson fo CX professionals in what shouldn’t happen. Like this one:

“Lowe’s was the worst – I just got a bug killer! I had to wait in the same line as the return line and it seemed like every return took 10 minutes. My order wasn’t even in the front or ready to go – it was in the back of the store and it took awhile for them to locate it.”

The state of customer service via social media in 2022

In contrast, one secret shopper perfectly captured the notion that “personalization” in CX should not be limited to marketing but every stage of the journey:

“The best experiences came from the brands that knew I was coming before I got there. It was faster and easier and made me feel like a VIP and it’s like the future of all shopping experiences. I cannot wait until it is the universal experience.”

The full Rakuten Ready report is gated and 30 pages long but has a number of good ideas in its “best practices” section at the back. These include prioritizing parking in front of the store for curbside pickup and drive-thru and planning for contactless experiences in the long-term if a brand isn’t offering them right now.