Jeff Sheehan calls them “war stories,” but they’re not filled with violence and conflict between countries.

Instead, the sidebars of his new book, Customer Experience Management Field Manual, The Guide For Building Your Top Performing CX Program, are anecdotes that bring critical business concepts to life. These include the differences between responsibility and authority, the value of a CX governance function and the essentials of cultural fit.

Throughout the book, Sheehan draws directly upon his own early career in the U.S. Army and as a United Nations Military Observer in Africa. He also weaves insights based on a business career that has included roles in sales, service delivery, customer service and more.

Sheehan had set out to write a LinkedIn post before realizing there was a potential gap among the existing library of CX books.

“I was reading so much literature about customer experience management and it was either broad, platitude kinds of stuff or specialized, highly technical kind of stuff — ‘How to use AI in your call centre,’ or ‘how to measure empathy in your voice of the customer program,’” Sheenhan told 360 Magazine.

“What I wasn’t finding was the, ‘Okay, how do you do this?’ If I just landed here and somebody said, ‘Hey, Jeff, you’re now the CX guy. Figure it out,’ I wanted a book — not 10 books, one book — to synthesize an approach. A book that would give me enough to get started.”

Sheehan recently connected over a Zoom call to discuss Customer Experience Management Field Manual in more detail. This interview has been edited and condensed.

360 Magazine: Why did a field manual seem like the best way to structure and organize the book?

Sheehan: When I was a second lieutenant new to the army and my commander said, “Sheehan, you’re in charge of field hygiene for our training exercise” — that’s a grand way of saying you have to figure out where to put the toilets and sanitation stuff. I had never done that before, but there are field manuals that aree very explicit about how to do those things.

What I loved about the field manual concept is, it will guide you whether you’re in the desert, in the woods, or in ice and snow. You have to contextualize the information for yourself but you get a good set of guidelines and rules of thumb.

360 Magazine: Should we be thinking of CX as a military operation, though?

Sheehan: I knew there were some risks that about that perception. I’m here in Ireland which has a very minute military element in its culture. But I’m an American, where we celebrate the troops. I didn’t want to have any weapons or tanks. I wanted to use the complexity of military projects — the professionalism, the teamwork — as the metaphor. I wanted to get the essence of those things. 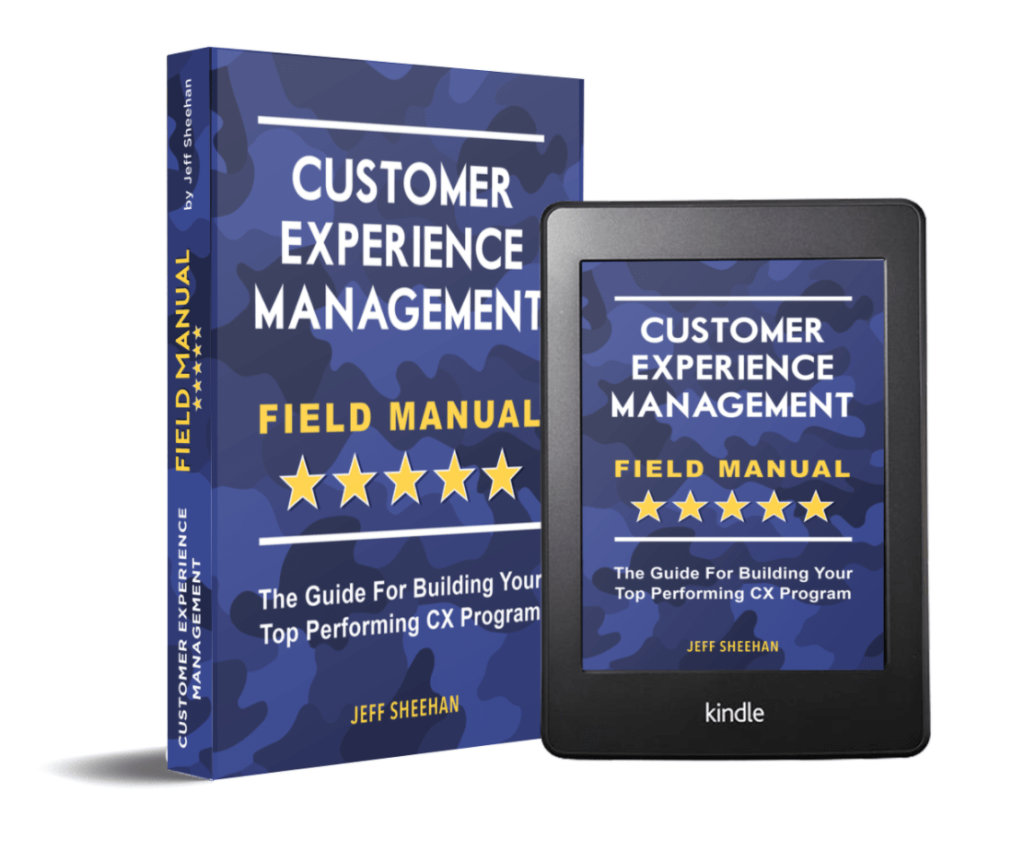 360 Magazine: What are some of the biggest CX challenges you foresee people turning to a field manual like this for?

Sheehan: A lot of businesses have gotten a lot more digital than may have had planned on their roadmap because of the quarantine. But how do you cater to a customer base — in banking, for example — that isn’t digital? My mother is 81 years old. She has an iPad, but if you asked her to check her bank balances or deposit a cheque on it, you might as well ask her to fly Richard Branson’s space ship. There are some folks that haven’t been able to come along for these digital journeys, and organizations need to figure out how to balance and address that demographic.

There’s also a shift in CX moving away from surveys and scores and being more influential in the operation of the business. Adding topline, getting customers to buy more or refer others to become customers. It’s not just a matter of eliminating calls. It’s really understanding what is it about their products and services and processes that customers don’t like, that cause them to abandon their carts or pick up the phone.

360 Magazine: What did you come across in the writing process that helped reinforce or confirm what you’ve identified as the best practices in the book?

Jeff Sheehan: One of the things I read in my research was The Scout Mindset by Julia Galef. She writes about “soldier thinkers” — think about a guy in a foxhole defending his position. He may feeling safe there, but the fact is nobody ever won a battle in the foxhole. You have to get out. There’s a similar mindset in organizations, where people defend the status quo. The scout mindset is someone who’s curious — you have a perceptive, you have a bias, but you set that aside to learn about other people’s points of view.

I love that, because I think one of the inhibitors to a successful CX program is no matter how much research and processes and fancy tools you use, ultimately it boils down to a recommendation on doing something differently. You’ve got to get people to believe that that’s worthwhile. The scout mindset helps you do that, and I love it because it meshes with my military metaphor so well.

360 Magazine: What’s one of the biggest Ideas you hope people will take away from the book?

Sheehan: CX is not this big mystery notion that some things you read might make it sound like. When you look into data and analytics you can get lost in the technology, but most business people don’t get down into those weeds. They’re looking for an outcome, and if you’re clear about that, you can get a lot of smart people to work towards it.

How Uber, Airbnb and DoorDash are evolving their customer experiences