A quarter of people surveyed across seven countries say the challenges facing organizations since the COVID-19 outbreak have had a negative impact when they reach out to call centres.

San Ramon, Calif.-based Five9 Inc., which makes cloud-based software for contact centres, published the finding as part of the launch of its fifth annual Customer Service Index survey. The firm partnered with Zogby Analytics to field questions to more than 2,000 people. While previous iterations had focused more on the United States and Canada, this year’s research gathered responses from France, Germany, Italy, Spain, and the U.K..

The most important elements of a strong contact centre experience were pretty standard. Respondents prioritized “reps getting the right answer, even if it takes more time,” followed by minimal wait times. Being passed around from one contact centre rep to another was the No. 1 pet peeve.

The Five9 report’s authors noted that sentiment around contact centre experiences was not the same globally. Those in the U.K. were the most likely to say experiences had gotten worse at 38 per cent, while 56 per cent of those in Germany found there was no change. Customers in the U.S. and Spain, meanwhile, cited some improvement. 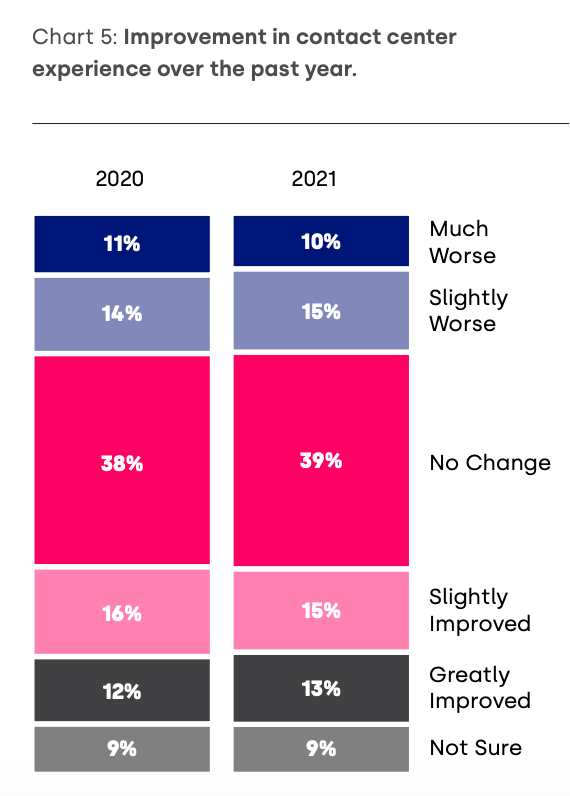 Five9 also reported that 30 per cent of respondents had ditched a brand to whom they had been loyal, a number the authors said could have been worse.

“For the most part, consumers were somewhat forgiving during the pandemic, recognizing that companies and brands were facing many challenges – from reduced hours and staff shortages, to supply chain issues,” the report said. “Additionally, many brands stepped up to the plate and did what was needed to improve the customer experience and retain customers.”

Although it suggested there was a correlation between call centre experiences and brand loyalty, nothing in the Five9 report directly ties the two together. There is also no mention of the fact that loyalty might have been affected by the time and ability customers have had amid lockdowns to research potential competitors.

There was also a lack of detail around what constitutes “worse” from a contact centre perspective. It would have been more actionable, for instance, if the report had been more granular in measuring whether hold times had gone up, or whether overworked agents were increasingly failing to answer questions.

That said, the Five9 report offers considerable breakdowns of the findings along different age groups, having surveyed customers as young as 18 and as old as 70. This is helfpul when trying to inform the use of new channels and technologies for agents. For example, 39 per cent overall said they weren’t interested in having their service issues handled over video services like Zoom. Among those aged 18 to 29, however, a full 70 per cent were open to the idea.