It’s primarily known as an app where consumers can hear their favourite music and radio programs, but Pandora’s senior manager of Quality of Service says the company is not only streaming, but constantly listening as well.

Speaking during a session at CX Networks’ Voice Of The Customer 2021 event on Tuesday, Jordan Golinkoff explained why Pandora has invested in a dedicated team to monitor myriad channels where users might share their challenges with the app. This includes social media, but also reviews published to major app stores.

Golinkoff, who has also spent time employed at companies like Apple, said there are too many organizations where the people keeping an eye on user feedback are divorced from the engineering group who could deal with a bug or product quality problem. Either that, or the wrong people are tracking the feedback.

“Often what I’ve seen is a lot of product managers and really motivated engineering managers (who will be) manually keeping an eye on app store reviews for their product, which seems like a really big waste of time, or not the best use of their time,” he said. “Having that centralized function allows the other teams to sort of take a deep breath and say, ‘Okay, they’ve got this.’”

Even in major consumer software firms like Pandora, there are so many engineering resources available at any given time, Golinkoff explained. His team is charged with not only identifying and tracking user complaints or problems, but determining which ones need to be escalated to a point where engineers need to be taken off of some other project.

Pandora, which was acquired by Sirius XM two years ago, has armed that team with tools from unitQ, which can ingest omni-channel user feedback in any language to spot, quantify, and prioritize product bugs.

According to Anthony Heckman, the firm’s head of growth, it’s often difficult for organizations to gather user feedback because the existing processes are manual, require working across multiple channels and is generally reactive.

“Things will get worked on the basis of how important the person is that sees the (app store) review,” he said.

In some cases, there will be those in CX, product and engineering roles with different missions who work at cross-purposes, which can make it harder to collaborate and take the right action for users.

The idea of unitQ is to “bring a common language around product quality,” Heckman said, in order to  streamline the process and makes it easier for individuals to come together an align around what needs to be worked on next. 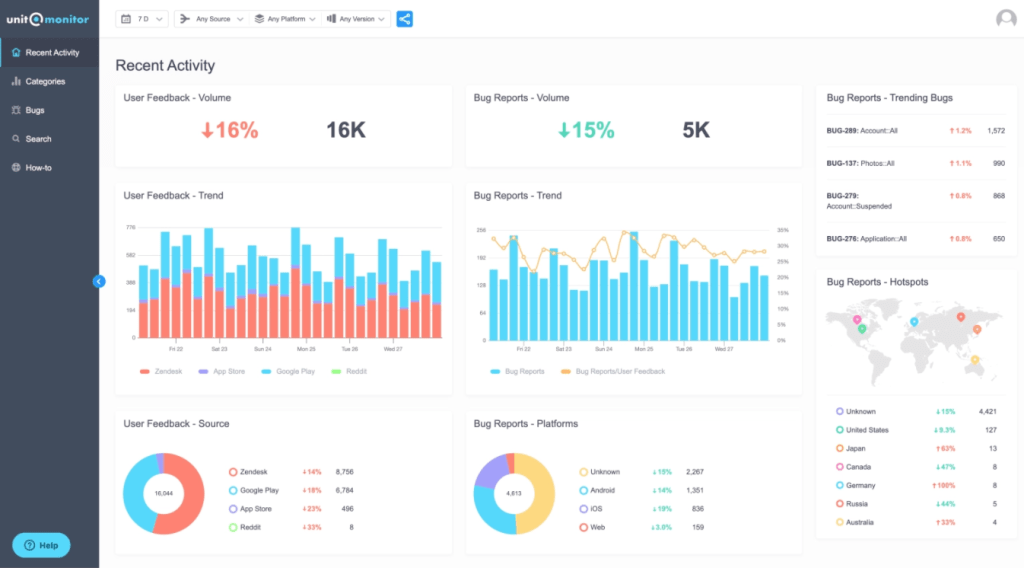 “Rather than guess at what you should build tomorrow, we say you should listen to what your users are telling you today,” he said.

While Pandora already had the right team in place, Golinkoff said unitQ’s tool has helped put “exclamation points” around issues that needed to be escalated. It has also offered what he described as a “very polished web portal” to visualize and report on data that than sharing a screen shot, an Excel sheet or Google Doc.

This includes not only what the app quality issue is but the platforms on which customers are talking about it and in what volume.

“You don’t want to have gatekeepers on your data,” he said. “Anyone that needs to access it should be able to.”

That said, Golinkoff didn’t advise taking user feedback as a key metric of product quality, any more than metrics like “engagement” or revenue that a product person would use to justify a new feature or change.

“A leading signal is how long did it take you detect there is a problem and how long to resolve the problem,” he said. “If a user is complaining about something, then we failed, because we want to know about the issue before the user complains about it.”

CX on Clubhouse: 3 groups to join or follow for an audio-only experience

ABB CX VP walks through a lab where customers co-create digital solutions, in person or virtually