It’s not a long video, but watching it is all Jon Irwin needs to feel deeply motivated about the company he works for and his role within it.

The clip shows a young boy and girl who appear to be standing just outside front door of their own house. “Hi Daddy,” they say. “We miss you and we love you.”

Their father is not behind the door. He’s a member of the U.S. National Guard who has been deployed for some 42 months. But through technology from Ring, An Amazon Company, he is able to see and hear everything his children are saying.

It’s these kinds of unexpected use cases that galvanize Irwin, who is called “chief neighbor experience officer” at Ring because that’s how the company refers to its customers. He was speaking, along with his head of global customer support, as part of a virtual event on Tuesday that was hosted by industry association PACE for National Customer Service Week.

Originally known as Doorbot, Ring is a home security vendor whose product include motion security cameras and allow people to capture intruders on camera and share them with their neighbours. 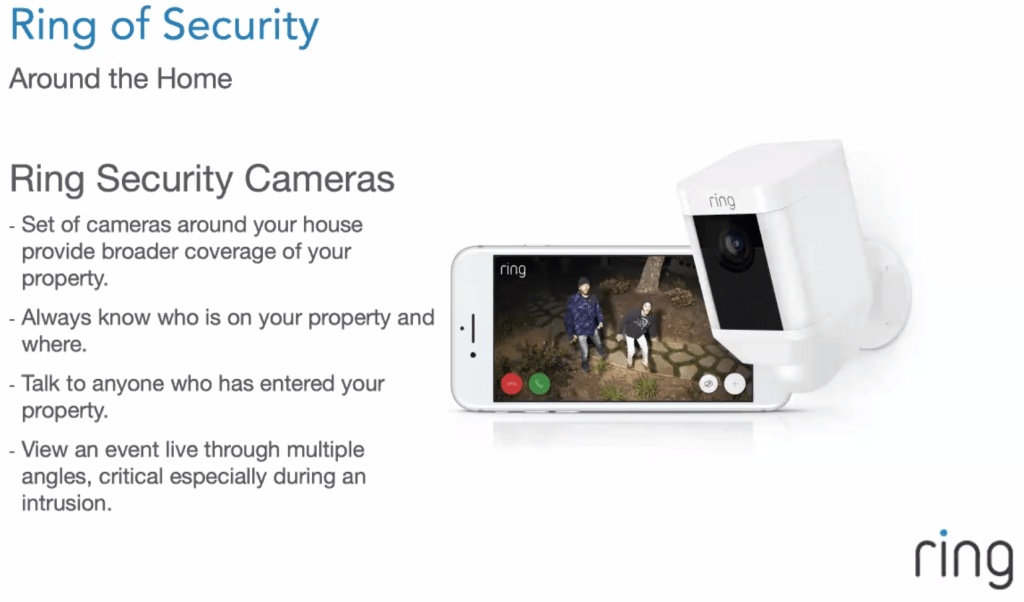 The addressable market is considerable, Irwin said, given that there are approximately 14 million property crimes in the United States every year, and burglaries every 1.3 seconds. Whereas home security products and services have traditionally been expensive, Ring can offer products for $10 a month that allow two-way talk, one-way video with streaming and data storage.

The “neighbor experience” Irwin described was based on organic exposure because its  some of its products are so visible on a front door. This leads to high engagement, charing or content and not just more purchases but civic endorsement, he said.

“It becomes this content generating machine but at the same time serves this purpose of making your neighbourhood safer,” Irwin said, adding that while the company has expanded its portfolio to offer additional “rings” of security, other use cases crop up. “We see a lot of rich, relevant content sharing. There are multiple videos of funny things, like a bear walking up to the door or other wildlife.”

Beyond simply offering its products, Ring has also begun convening a sort of user group, dubbed the Neighbour Experience Foundation, where customers can share common security problems and brainstorm solutions. It also works with a range of technology partners to get informed of neighbor/customer needs. This includes Tableau, Kustomer, Ask Nicely. Solvvy and of course Amazon Web Services (AWS).

Of course, customer service is arguably even more critical for a company like Ring than the average vendor, and requires thinking in terms of other neighborhoods, said Carin Falconer, Ring’s head of global customer support. That’s why the company has expanded its range of business process outsourcing (BPO) partners as it grows into new geographies.

Those BPO partners have agents who are local to the culture, the language and the environment to “speak to their neighbors in a way that’s familiar to them,” she said.

Like a truly good neighbor, Falconer said Ring’s goal is to resolve issues customers may have before they need to reach out. That requires technology, but also a framework for organizing its resources and approach.

Ring has made an acronym to describe, this, PARIS, in which working to “prevent contacts” is the first goal. This is followed by “A” for automating contact resolution, “R” for reducing handle time, “I” for increasing a positive response rate and “S” for speed.” 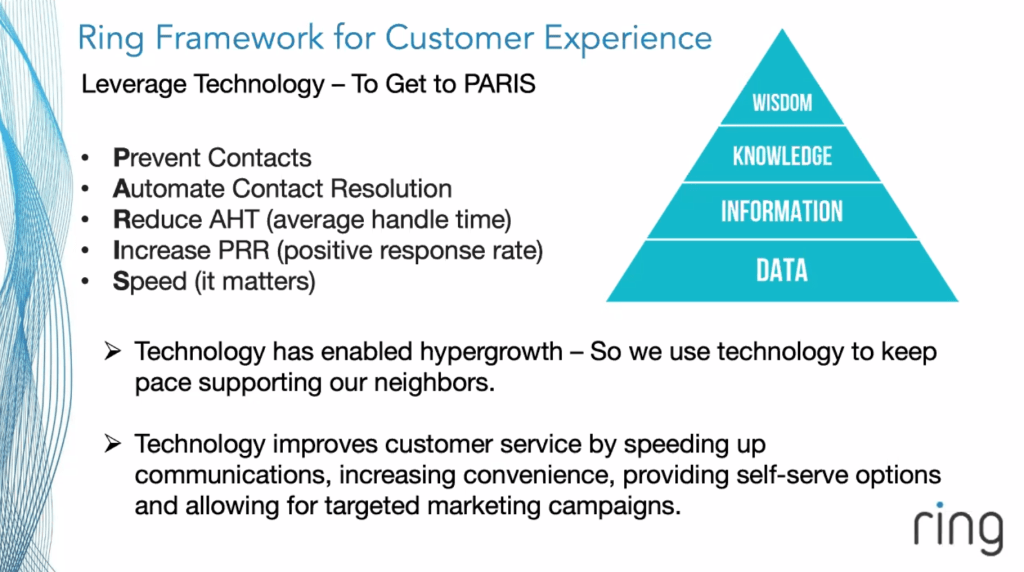 At the same time, Falconer said her team’s job is about recognizing all the nuances and unique circumstances with specific customer issues.

“There’s this ongoing dilemma and debate we have consistently within own organization when it comes to things like reduced handle time,” she said. “We have to offer help and service to our neighbors with a handle time that meets our needs, but also resolve their issue in a way that enables them to understand we’re truly here to support them.”

Like many other organizations, Ring has also had to shift its employee base into a work from home mode, but the company has worked to create a culture where team members feel valued and included as it evolves. Each time Ring gets ready to launch a new product, for instance, an employee is made “event captain,” and is able to oversee the creation of training programs, offer prizes and (when employees are able to gather) have a celebration. Employees are also able to become part of a beta group for new products well in advance of the launch, she said.

Even internally, in other words, Ring tries to act neighborly.

How AWS can demonstrate some CX leadership after its outage