Though their roles are key to building, nurturing and maintaining relationships that lie at the heart of a brand’s customer experience, less than 10 per cent of contact center agents around the world give themselves high marks for connecting with those they serve.

In its report, ‘Human Values: The Operating System For A High-Performing Contact Center,’  San Francisco-based technology provider Genesys published responses to a survey of more than 16,000 agents across nine different regions.

The results of the research were even more stark when they were broken down by country. In North America and Europe, for example, only five per cent of agents cited quality, empathy and listening as their greatest strengths. Instead, those regions said their greatest strengths were speed and efficiency. Globally, the top-ranked strength overall as “thoroughness and completeness.”

Of course, contact centers have been put under tremendous pressure since COVID-19, but the Genesys data suggested many agents are more than open to developing their talents. “Learning new skills” was a top source of job satisfaction among 38 per cent of respondents globally, for instance, as was “learning new technologies” at 23 per cent. More obvious  source of job satisfaction included gaining recognition through rewards, cited by 38 per cent, and opportunities for bonus compensation, cited by 37 per cent. 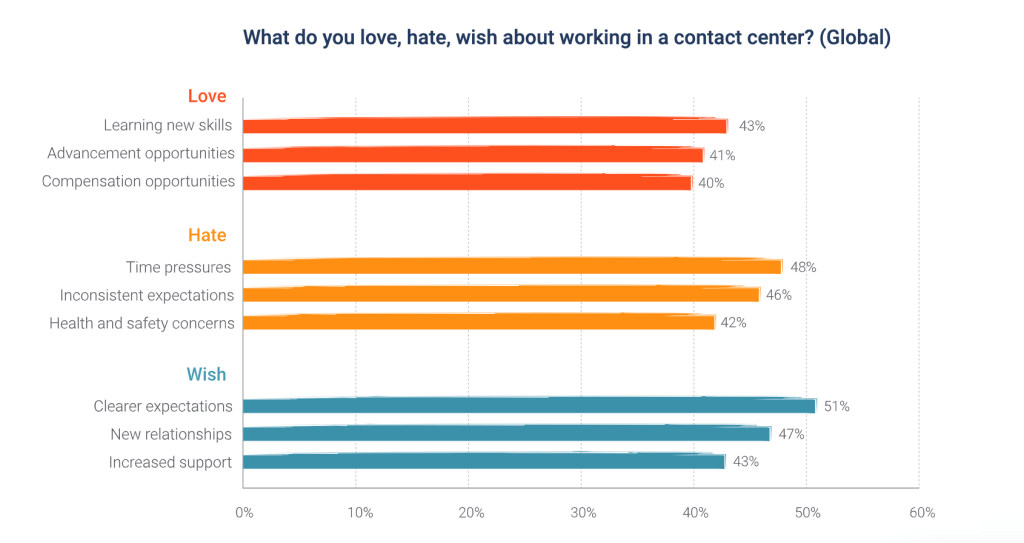 The report’s authors noted that personal responsibility is a top value among contact center agents, though organizations may not be setting them up to translate that value into having better conversations with customers.

“Employees are most likely measured and incentivized on efficiency and speed to resolution, but they’re missing out on the listening and understanding phase that really matters to consumers,” the report said. “To encourage more empathy, contact center leaders should connect any initiative with employees’ values. For example, you should link an initiative to personal responsibility or growth.”

The Genesys research offers a greater window into the emotional elements of working in a contact center that almost anything I’ve read before. Other stats within the findings help explain why quality, empathy and listening is not what it could be.

When asked about what they love, hate and wish for in their jobs, for example, “clearer expectations” was the top wish at 51 per cent, while time pressures was the No. 1 “hate” among 48 per cent.

Beyond the numbers, Genesys peppers the gated 36-page report with some creative ideas on how to take action, including a suggestion that contact centers run their own love/hate/wish survey.

Perhaps the most fascinating area is a set of classifications of contact center “archetypes.” Adventurers, for example, are “motivated by experiences, which can occasionally overlap with something that could be a possession (eg, buying a home).” Then there are “Steadies,” who are “conservative in all things, avoiding risk or change. They live a traditional family life and believe in good morals.”

There’s always a risk of putting agents in a box with this kind of thing, but if nothing else it encourages organizations to think more deeply about the character traits of their agents, and how that will influence their motivation and performance.