A quarter of more than 10,000 people surveyed in the U.K. say brands have used the pandemic as an excuse for being late with deliveries or other issues that have hampered their services.

While ICS executives chastised businesses for blaming COVID-19 for poor service in interviews with media such as the BBC, the data suggests customers were generally served better than might have been expected.

For example, 14.9% of customers said they experienced a problem with an organization, which was the highest rate since 2009. However satisfaction with complaint handling was at its highest ever level, the UKCSI report said.

The average Net Promoter Score (NPS), meanwhile, was 23.5, which was 2.8 points above its July 2020 level and the highest ever recorded in the UKCSI. This is despite the fact that, for the first time, 50 per cent of customer experiences recorded in the UKCSI were conducted through digital channels (either on an organization’s web site or by email, app, web chat, text or social media).

“This UKCSI shows that many of the organizations that have higher customer satisfaction than a year ago have generated fewer problems for customers, enabled more experiences that are right first time and performed better on complaint handling,” the report’s authors wrote. “Nevertheless, customers who have experienced a problem are generally less satisfied that those who have not: only exceptional complaint handling results in higher than average customer satisfaction. In order to drive further improvements in customer satisfaction and engagement, organizations cannot rely on problem resolution and service recovery.”

Though it was confined to the U.K., there is much in the nearly 100-page UKCSI that could help inform similar efforts in other geographies, as well as findings that are probably true in markets around the world.

Consider a section that explores the fact that sometimes, providing an excellent customer experience may cost more. The UKCSI asked consumers why they might be willing to do so. The top answers included “I trust the company I use,” cited by 35 per cent, followed by, almost a third who said, “I feel happier knowing I have the support and advice.”

This is also probably the first CX research I’ve ever seen that continues to include writing and sending letters via surface mail among the channels studied for customer satisfaction. Perhaps even more remarkable, letter writing was the only channel where satisfaction suffered a decline — and it was slight. 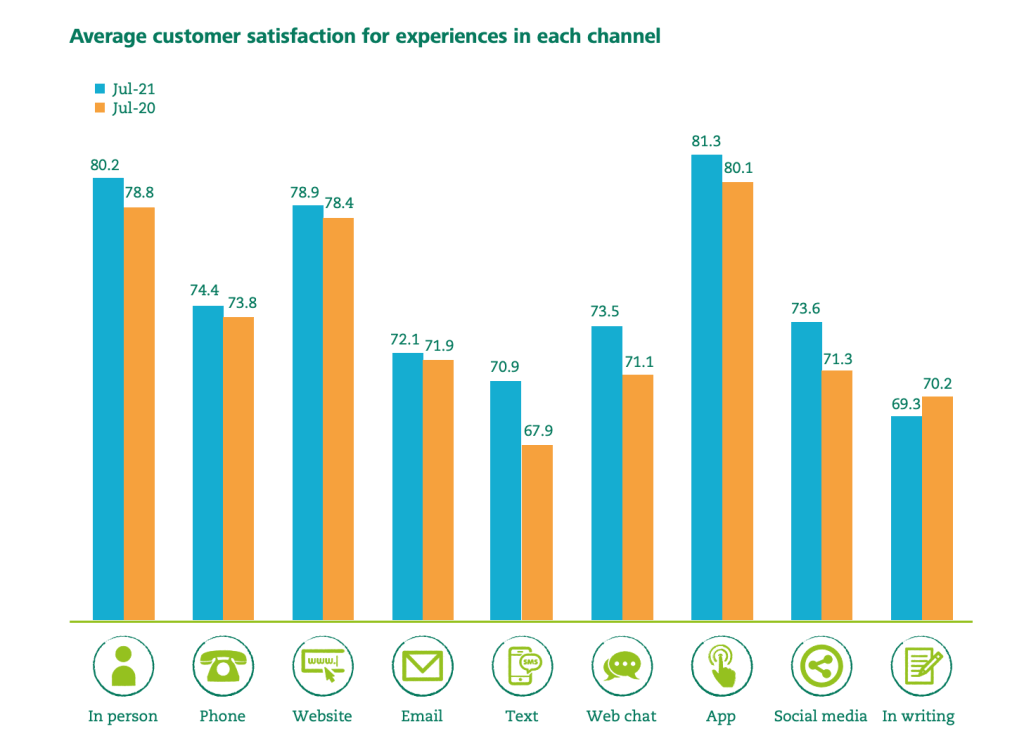 The final chapter of conclusions and recommendations is extensive, and helped confirm what might be considered common sense that isn’t always commonly applied. This included a sidebar that discussed where human intervention is important, such as:

Why CX should begin with a warmer introduction

• Where a customer needs advice about different options

• A customer is experiencing a sudden change in circumstances or a challenging life event, such as moving house, bereavement, change in employment status

• Where an organisation has failed to meet commitments, or a problem has occurred

• Experiences that have high personal importance for customers

The UKCSI is not gated, and well worth perusing in its entirety.