Shelby Walsh has a very specific word to explain the way consumers have reacted to the challenges by 2020, though it’s admittedly a little difficult to pronounce.

“Hygge,” from the Danish, refers to “a quality of coziness and conviviality that engenders a feeling content and well-being,” the president of Trendhunter told the audience in a keynote session of the firm’s Future Festival Virtual event on Tuesday.

Faced with the COVID-19 pandemic, the racism issues that led to the Black Lives Matter movement and the recent U.S. election, it’s only natural that consumers would want to enjoy a “hygge” experience. As Walsh pointed out, though, it’s not just an apt descriptor for this 2020 — it was actually named word of the year by the OED in 2016.

“If you think about what happened then, we had the victory of Donald Trump, which we’re kind of coming full circle to now, but there was also Brexit,” Walsh said. “When we can’t control our external environment, we look to control our internal environments and the space we share with others.”

Establishing that what looks brand new today has a connection to the recent past was an ongoing theme in Walsh’s keynote, which identified the way brands can think about the shifts in demographics, attitudes and other factors that will inform customer expectations.

Beyond experiences that provide comfort, for example, Walsh suggested brands need to ask themselves whether they offer something that will be attractive to “smart spenders” who are saving more in light of the economic freewill precipitated by the Coronavirus.

A case in point is Wanda Box, which plays to a trend Walsh dubbed “restaurant replications,” where consumers try to create gourmet dining experiences at home. Wanda Box offers not only ingredients for great meals but kits tied to a particular country or theme. The ingredients will come with accessories that help enhance the experience, including scented candles and a suggested Spotify playlist, she said.

The same shift toward frugality as well as sustainability explains the success of brands like Love Shack. While the traditional wedding industry has been effectively flattened by the pandemic, Walsh said LoveShack can provide a pop-up ceremony to be held in a shipping container for an affordable price.

Love Shack isn’t alone though. Walsh pointed to others, such as the Pop Up Chapel Co., which has become similarly attractive to Millennials and Gen Z couples that want something “cooler than City Hall” and who eschew a big to-do.

Other experience elements brands should include on their checklist include promoting a sense of community and connectedness, a sense of escape and using digital services to enhance closeness, Walsh said.

Just look at Starface, a “skincare positive brand” which encourages consumers to put stickers on their face which treat pimples or other blemishes. Rather than hiding for fear of not looking their best, Walsh showed a Starface video that was generated by a real-life user who proudly talked about wearing one of the stickers while shopping. “

Such user-generated videos reinforce what Walsh called the rise of “everyday ambassadors,” where brands celebrate individuals who positively shape the culture.

“Inspiration trumps aspiration,” said Walsh. “Consumers are gravitating to brands that are elevating those who are inspirational to others.” 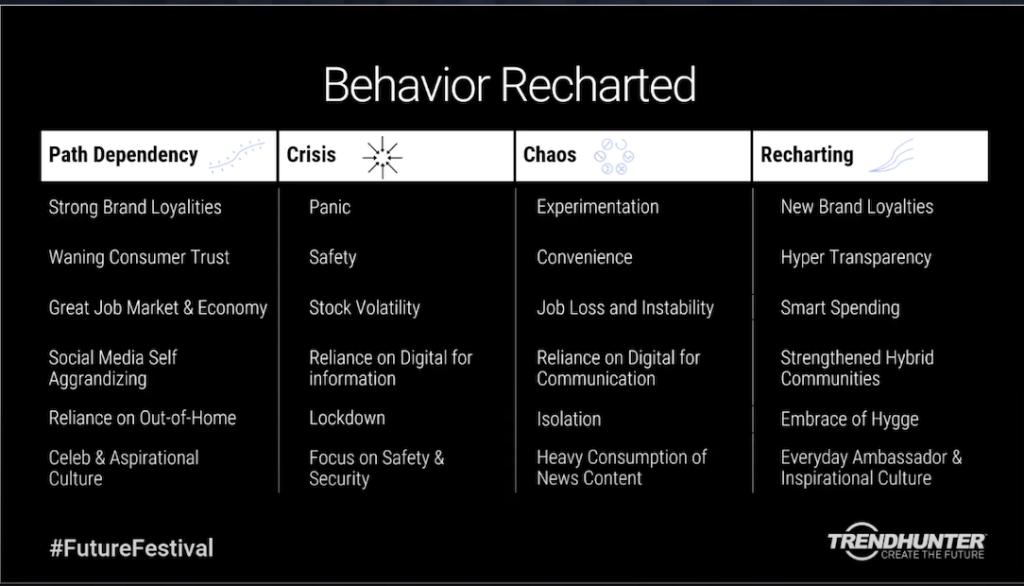 While e-commerce and digital experiences have been pushed to the forefront out of necessity, Walsh pointed out that many of the firms she cited in her presentation are making efforts to show up in person as well.

This is true of Starface, which has been part of live beauty events, and even Lego, which has offered STEM-based educational content to asset parents home-schooling their children but which is also planning to open at least 120 more retail stores.

“Face to face connection is not going anywhere. I want to underline that,” she said, predicting a “reverb effect” towards more in-person experiences once COVID-19 has gotten under control to the point where gathering is less problematic.

What’s more likely is a more complex mixture of online and offline. Walsh cited the NBA, which she said will likely continue to set up screens for “virtual fans” as an affordable way to give people a curtsied seat to cheer on their favourite teams.

“What’s happening (with digital) is that consumers getting exposure to the way life could be,” she said, “and they’re forming habits around that.”

How holiday shopping customer experience strategies will change amid COVID-19