The rise of “stakeholder capitalism” and an increased emphasis on environmental, social, and governance activities will drive senior marketers to rethink customer experience as “human experience,” according to a study released by Infosys.

Based on a survey of both CMOs and their CIO counterparts, the Bengaluru, India-based consulting firm published CMO and the C-Suite: The DNA of A Partnership. Among other findings, the research showed 83 per cent of surveyed senior executives strongly agree that CMO-CIO collaboration can play a pivotal role in mapping and aligning business needs with stakeholder demands.

While customer centricity has been championed by firms ranging from Amazon to IBM, the Infosys report suggests HX makes more sense based on concepts such as stakeholder capitalism. According to the Enterprise Engagement Alliance, this is defined as an effort “to create shareholder returns only by creating value for society–customers, employees, suppliers, communities, and the environment.”

Similarly, Infosys said more organizations are evaluating themselves based on a “triple bottom line” that encompasses environmental, social, and governance impacts.

Based on the survey, however, there was a clear disconnect between the priorities of marketing and IT. A majority of 58 per cent of marketers said they support the idea of what was dubbed HX. In contrast, only 35 per cent saw HX as a priority, and just more than half (51 percent) believed the CMO role is going to disappear altogether. Infosys, notably, did not agree with the CIOs and said marketers will simply evolve as HX programs take hold. 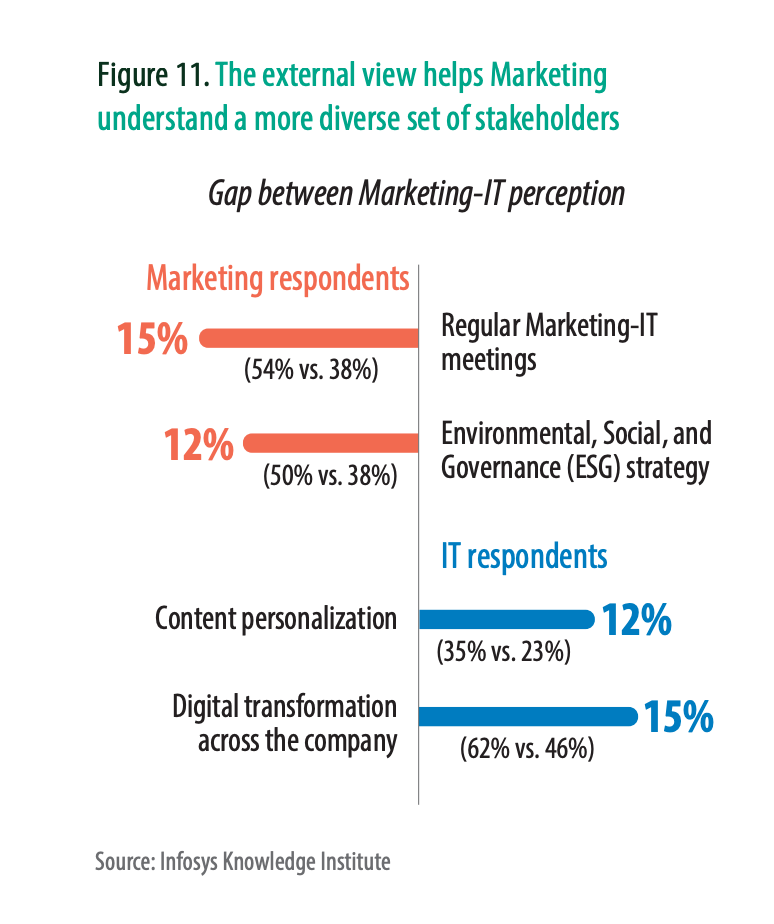 “Digital is the great enabler here — connecting brands with customers via stories and experiences resonating on a deeply human level,” the report’s authors wrote. “Marketing can bring in and interpret qualitative, customer-centric data to enrich traditional analysis and big data by adding context to better understand customer motivations and pain points.”

The talk of HX in the Infosys report might be influenced in part by its partners, including an agency known as Wongdoody, whose president was quoted as saying “HX puts the consumer, client or employee at the center of everything we do — end to end.”

While some might not see a replacement to the CX acronym as helpful right now, it does speak to the increased discussion of how employee experiences and those of customers are interdependent.

Perhaps naturally given its IT services, Infosys uses the report to make the case that organizations with strong HX also tend to be more mature in their use of digital technologies. There is extensive discussion of a “living enterprise,” where automation drives more intuitive decisions, companies are more responsive in delivering value and experiences can be more perceptive of what stakeholders want or need.

The full 40-page report may be worth pursuing for those trying to discern the best way to wrestle with the technology and strategy needed to better serve customers, particularly as we continue to grapple with the impact of COVID-19. Infosys suggests that HX will help organizations do a better job of getting at the “why” questions buried in the data they’ve collected.

One area that could probably have been more fully explored here is the role of sales. This is another function historically at odds with marketing and resistant to IT, but arguably even closer to customer experiences. To look more holistically at stakeholders beyond buyers, among reps and their manager, might be an even harder sell.