Despite the pressure they’re under to resolve questions and complaints, few customer experience leaders are counting on their staff’s expertise to do their jobs well, based on research published by OTRS Group.

The Cupertino, Calif.-based firm, which provides software to assist with customer service activities, commissioned Pollfish to survey approximately 500 business professionals across the U.S., Germany, Brazil, Mexico and Singapore to produce its report,  which was simply titled OTRS Spotlight: Customer Service.

Rather than relying on agents’ knowledge, the study suggested it was better for companies to provide tools that accelerate the process of finding the right information. This included on-site training from product and service experts, which was cited by 22 per cent, real-time collaboration tools like chat (20 per cent) and repositories like an intranet or knowledge base (21 per cent).

Not surprisingly, 40 per cent of customer service leaders said having access to complete and accurate customer data has been key to offering a great experience. However nearly as many stressed the importance of providing context-based help to agents during a service interaction.

In fact, the study said improving the use of customer data was a higher priority among customer service leaders than boosting agent satisfaction or improving internal processes.

“Promote a customer-centered culture,” the report’s authors advised. “Help other departments see their impact on the long-term relationships that are built with customers – be that through taking time to train the support team, having channels for the customer service team to share feedback with the product team or using your own products with the team.”

You could argue that investing in on-site training is, in fact, linked to the value of having more knowledgeable agents operating in a contact center. Going through the OTRS Group report, you can’t help but come away with the impression that many customer service leaders don’t have a great handle on  how to improve experience.

Many of the stats in the research are surprisingly low — while the authors highlight the fact that 24 per cent have found automation has been successful in connecting with other departments, that’s still less than a quarter. Similarly, connecting data from multiple systems is a priority for just 17 per cent of those surveyed.

There were more significant majorities of opinion around areas such as self-service. For instance, 69 per cent said deploying self-service tools increased customer satisfaction, and almost half said they meant agents had more time to spend with each customer. 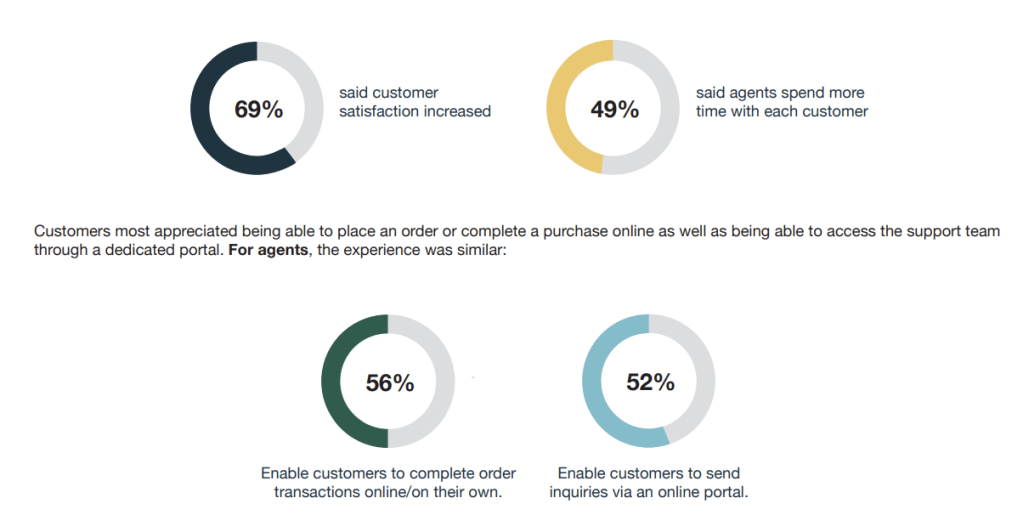 OTRS Group is obviously in the business of using technology to support customer service teams, and the study is clearly designed to promote greater automation. The findings, which are ungated, may not be strong enough to get business buy-in from senior leaders but could help start a discussion about what kind of real-time information could lead to better service.

47% of online shoppers say speed is more important than selection