Not along ago, Michael Lawder was out having dinner with a colleague who runs the customer experience (CX) function for a Fortune 500 company. He told Lawder that, out of all the issues that come into the firm’s service team, less than 50 per cent are fully resolved.

Most people might reserve the majority of their sympathy for the company’s customers, but Lawder — the chief experience officer of New York-based ASAPP — found his heart going out to the agents as well.

This may be in part because ASAPP’s products and services, including AI native technology and self-learning engines, are designed to empower and augment the work of contact centre agents. But it’s also because Lawder, who moved from an advisory role into a full-time position with ASAPP in 2020, has spent plenty of time as an agent and contact centre manager himself.

Lawder’s close to 25 years running customer service and experience teams, for example, includes stints at brands like Apple, Samsung, and EA, among others. He said moving from there to the vendor side has deepened his perspective, as well as his appreciation, for what agents are up against.

“It is interesting that, in many ways, the way this industry operates was never set up for tremendous success,” Lawder told 360 Magazine. “It’s a trillion-dollar industry globally, it’s typically largely outsourced to far away places. And you have people who get two or three weeks of training and then are unleashed as the voice of the brand they’re serving in complex, emotional interactions.”

Conducted in partnership with the University of San Francisco’s School of Management Master of Science in Marketing Intelligence program, the research involved a survey of more than 500 customer support agents and in-depth interviews with ten agents.

While many of the findings are consistent with similar CX studies, the ASAPP research paid special attention to the “cognitive stress” put on agents — in other words, the anxiety that can come from forcing agents working at home to keep their webcam on, or giving them tools that make it more difficult to do their jobs.

The report also showed, that, despite all the rhetoric about using AI to let agents focus on higher-level tasks, 72 per cent of agents said solving simpler customer problems makes them feel motivated.

This resonated with Lawder, who recalled trying to walk customers through connecting to Wi-Fi when he was an agent in the early days of the 802.11 standard.

“Back then it was very complex and difficult to serve and support those issues. Those are the kinds of things you want to have help with,” he said. “As someone who started as a call centre agent at Apple, I know what it’s like to talk to 25 upset customers every day.”

ASAPP also found that 58 per cent of agents either didn’t fear that AI would take their job or were undecided, and 40 per cent said they believe it will improve the customer experience.

Lawder suggested brands determine where a human touch is needed in part by thinking through parts of an interaction where the details are not only highly complex, but where some of the information customers provide is private and needs a stronger sense of security.

“It’s not automation as this binary concept where you either automate something or you don’t,” he said. “There’s no question when it’s something like a customer calling a company and asking for the status of their order. Most customers don’t want to make that call, and most companies don’t want to answer that call.” 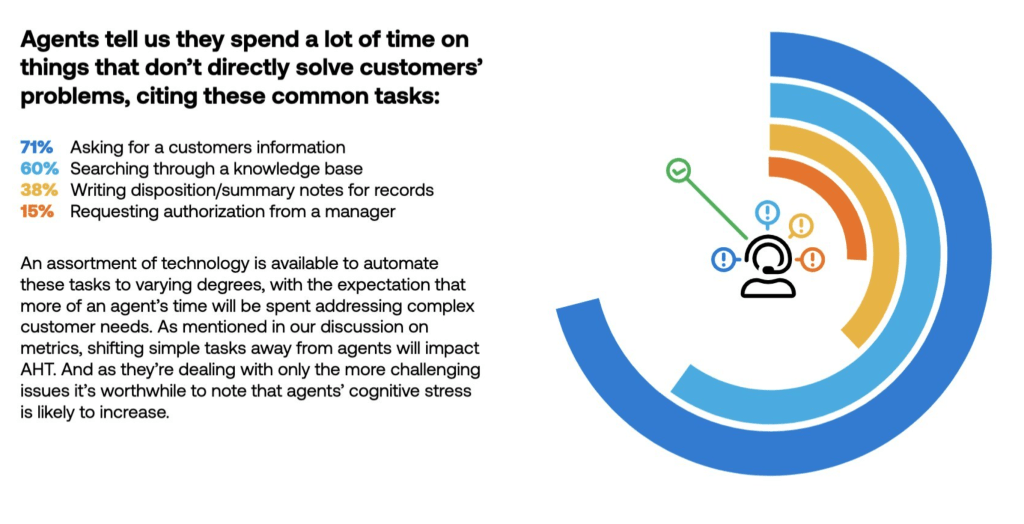 The pandemic has put an obvious strain on CX in some cases, particularly on customers’ patience. The ASAPP research not only found that four out of five agents reported being berated by customers, but that 36 per cent have been threatened with physical violence.

Lawder said this typically happens when customers reach the end of their rope because agents lack the information or ability to solve their problems. Empowering agents involves not only providing them the right technologies to manage customer information, but also policies to address threats and to move forward with creative solutions as necessary. Too often, as Lawder pointed out, agents have to ask permission from a manager before doing anything outside the box.

“You see agents literally raising their hands like they’re in grade school,” he said. “It’s really important to change the conversation from ‘how do we reduce costs’ to ‘how do we maximize the value of every conversation,’ and build better relationships with these customers who are the whole reason we exist in the first place.”