“In the past, we said that we had the electricity wires humming. In the future, we want to have Queensland humming,”

Norike Ganhão knows the difference between those two statements in a subtle one. Yet it speaks to something critical about how Powerlink Queensland looks at its purpose as an organization, and in how it approaches long-term changes to the customer experience it delivers.

Ganhão, Powerlink Queensland’s general manager of strategy, was one of two leaders from the Australian transmission network service provider who spoke during a session at the recent Customer360 Africa virtual summit.

Based in Brisbane, Powerlink Queensland operates a high-voltage network that serves large-scale customers such as mines, industrial firms and telecommunications companies. It also indirectly serves more than five million “Queenslanders,” including individuals and more traditional business. 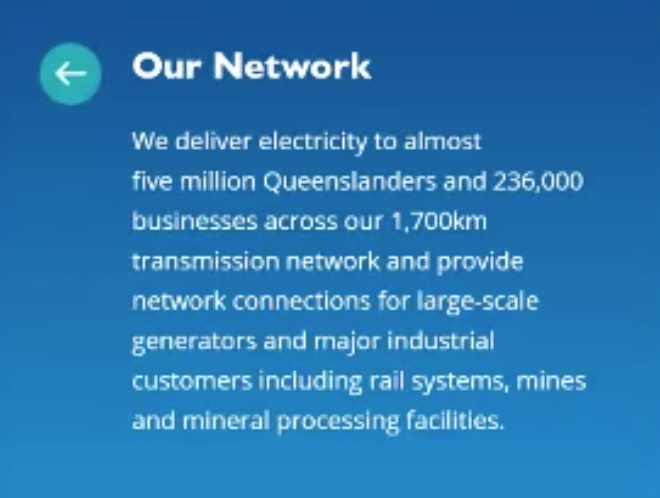 Like others in the energy and utilities space, however, Powerlink Queensland is recognizing its business is changing rapidly in response to three main forces. These include the move to more sustainable use of renewable sources of power instead of fossil fuels, electrification and the decentralization of power as more businesses and even home owners install solar panels on their roofs and become distributors as well as consumers of energy.

This led Powerlink Queensland to do some soul-searching, Ganhão said. Compared with when it merely followed the rules of regulators, now it needed to think through what it wanted to become as an organization, and how that would change its relationship with customers.

“It used to be like a relay race, where each participant in the chain of electric supply knew exactly what their role was, they did their bit and handed it over to the next one down the chain,” she said. “It’s now more something akin to synchronized swimming, where everybody has to do synchronized moves for the overall best benefit of the customers — and it includes customers now.”

Powerlink Queensland decided to adopt the “cascade of choices framework” as described in the book Playing to Win by A.G. Laflry and Roger L. Martin. This forced the organization to look 30 years into the future and imagine what its customers might look like, what their needs might be and what its role would be in serving them. It’s an important exercise because the network Powerlink Queensland operates can have a long asset life, where decisions it makes now might be felt for decades to come.

Beyond a futuristic outlook, Ganhão said the framework allowed Powerlink Queensland to make use of metaphor in reimagining its CX.

“In the past we were reliable tradesmen. We did what we did and we did it really well but we did what we were told,” she said. “In the future we want to be the energy wizards — we want to have a real impact. We want to make and implement those changes.”

As an example, Powerlink Queensland might not have full control of everything related to the transition from coal fire to renewable energy, but it can provide a comprehensive view of the supply chain and bring together the industry to seek the best outcomes for customers, she said.

In early July, Powerlink Queensland officially launched its new statement of purpose, which is “Connecting Queensland to a world-class energy future.” It has provided training to its executive team so that, through storytelling techniques, they can effectively talk about the organization’s purpose in a consistent way and to help others see their place in the story, Ganhão said.

What the ‘Great Resignation’ means for CX careers

Powerlink Queensland is also mindful of how its action could affect health in other ways.

“Mental well-being can be  heavily impacted by bill stresses, and electric bills are a big bill,” she said. “That can really change appetites for trust in our industry.”

Even consumer trends without an obvious correlation are falling under Powerlink Queensland’s radar. Fortescue noted the issues such as inclusivity and identity, which tend to become politicized.

“With climate change, increasingly energy prices, energy usage and generation and production has become politicized,” she said. “And politicization feeds into identify — your political choices, decisions, and ideals all connect back to your identity.”

Fortescue compared the potential impact to concerns around single-use plastics, which have led countless restaurants to replace traditional straws with paper ones.

Ganhão said everything Powerlink Queensland studies takes into account the idea of a “preferred future,” while recognizing reality may be different.

“We’re mindful we don’t have control of the external environment,” she said. “But we want to make sure our strategy can pivot.”